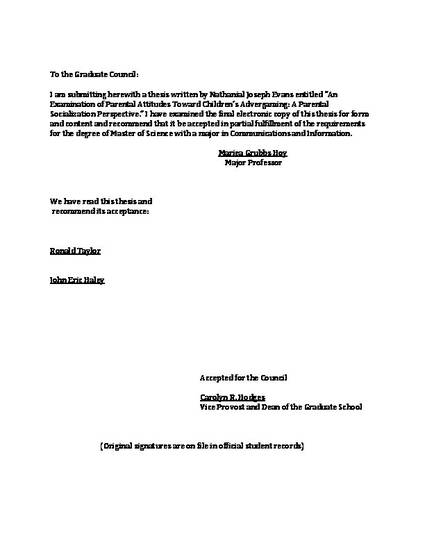 Every passing year is witness to increases in Internet use among younger populations. The amount of time spent online among children ages two to 11 is increasing at a faster rate than that of the entire online population. The rise in Internet use among children has resulted in marketing and advertising efforts aimed at increasing brand awareness, involvement and immersion. The use of branded entertainment and advergames is a popular practice when attempting to increase brand awareness and loyalty among children. Advergames offer a combination of entertainment and advertising that are designed to appeal to younger populations that have difficulty distinguishing persuasive messages from entertainment content. Past research on parental attitudes towards children’s television advertising indicates parenting style influences subsequent attitudes towards advertisements. The purpose of this study, utilizing parental socialization theory, examines parenting style and how it affects attitudes towards children’s advergaming. This study analyzes results from a nationwide online survey (N=214) and examines differences between authoritarian, authoritative, neglecting, and indulgent parents in their attitudes towards children’s advergaming. Findings indicate that differences in attitudes towards advergaming do exist among the four parenting styles in the hypothesized direction yet these differences were not significant.