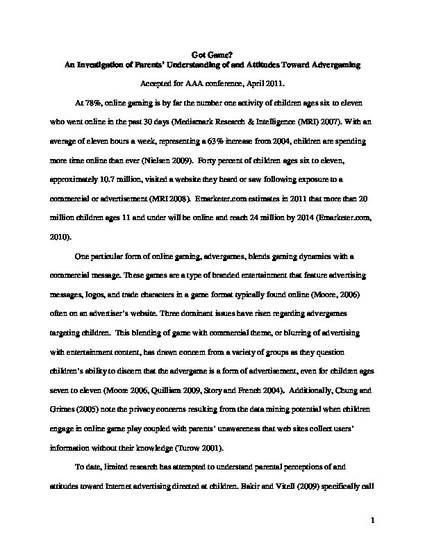 Other
Got Game? An Investigation of Parents’ Understanding of and Attitudes Toward Advergaming
Annual Research Symposium of the College of Communication and Information
Download
Location
CCI Auditorium, 321 Communications Building
Disciplines
Abstract

To date, limited research has attempted to understand parental perceptions of and attitudes toward Internet advertising directed at children. As part of a larger study, three phases of research were conducted. The first two phases, qualitative interviews with six parents of children seven to eleven and quantitative pretesting with twenty different parents, were exploratory in nature to determine parents’ understanding of the advergaming concept, their awareness of their children’s exposure to advergaming, and finalize an operational definition of advergaming. A self-administered online survey was given to a diverse sample of 214 parents of children ages seven to 11 via E-Rewards.com, an online opinion panel. Of the 214 respondents, 61 (28.5%) parents indicated their child had played an advergame in the past 30 days and 153 (71.5%) parents said their child had not played or did not know. Independent samples t-tests were performed to compare the means for the attitude questions. The analysis revealed seven significant differences between those parents whose child had played advergames within the past 30 days (n=61) versus those who had not (n=153). The results indicate that this is a rich area for exploration.

Comments
This paper has been accepted for AAA conference, April 2011
Citation Information
Nathan Evans. "Got Game? An Investigation of Parents’ Understanding of and Attitudes Toward Advergaming" (2011)
Available at: http://works.bepress.com/nathan_evans/1/