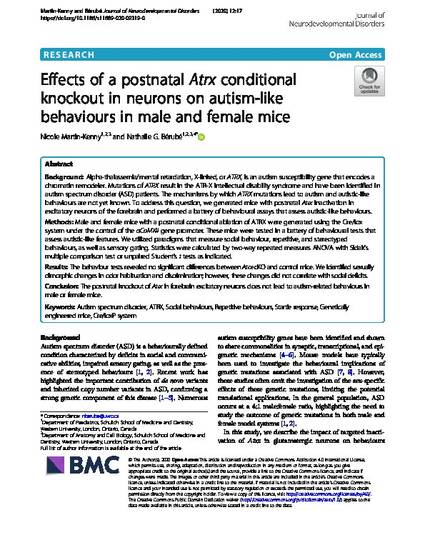 BACKGROUND: Alpha-thalassemia/mental retardation, X-linked, or ATRX, is an autism susceptibility gene that encodes a chromatin remodeler. Mutations of ATRX result in the ATR-X intellectual disability syndrome and have been identified in autism spectrum disorder (ASD) patients. The mechanisms by which ATRX mutations lead to autism and autistic-like behaviours are not yet known. To address this question, we generated mice with postnatal Atrx inactivation in excitatory neurons of the forebrain and performed a battery of behavioural assays that assess autistic-like behaviours.

METHODS: Male and female mice with a postnatal conditional ablation of ATRX were generated using the Cre/lox system under the control of the αCaMKII gene promoter. These mice were tested in a battery of behavioural tests that assess autistic-like features. We utilized paradigms that measure social behaviour, repetitive, and stereotyped behaviours, as well as sensory gating. Statistics were calculated by two-way repeated measures ANOVA with Sidak's multiple comparison test or unpaired Student's t tests as indicated.

RESULTS: The behaviour tests revealed no significant differences between Atrx-cKO and control mice. We identified sexually dimorphic changes in odor habituation and discrimination; however, these changes did not correlate with social deficits.

CONCLUSION: The postnatal knockout of Atrx in forebrain excitatory neurons does not lead to autism-related behaviours in male or female mice.