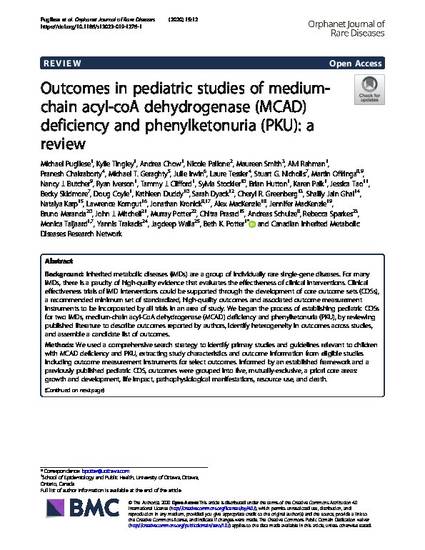 BACKGROUND: Inherited metabolic diseases (IMDs) are a group of individually rare single-gene diseases. For many IMDs, there is a paucity of high-quality evidence that evaluates the effectiveness of clinical interventions. Clinical effectiveness trials of IMD interventions could be supported through the development of core outcome sets (COSs), a recommended minimum set of standardized, high-quality outcomes and associated outcome measurement instruments to be incorporated by all trials in an area of study. We began the process of establishing pediatric COSs for two IMDs, medium-chain acyl-CoA dehydrogenase (MCAD) deficiency and phenylketonuria (PKU), by reviewing published literature to describe outcomes reported by authors, identify heterogeneity in outcomes across studies, and assemble a candidate list of outcomes.

METHODS: We used a comprehensive search strategy to identify primary studies and guidelines relevant to children with MCAD deficiency and PKU, extracting study characteristics and outcome information from eligible studies including outcome measurement instruments for select outcomes. Informed by an established framework and a previously published pediatric COS, outcomes were grouped into five, mutually-exclusive, a priori core areas: growth and development, life impact, pathophysiological manifestations, resource use, and death.

CONCLUSIONS: Heterogeneity of reported outcomes and outcome measurement instruments across published studies for both MCAD deficiency and PKU highlights the need for COSs for these diseases, to promote the use of meaningful outcomes and facilitate comparisons across studies.