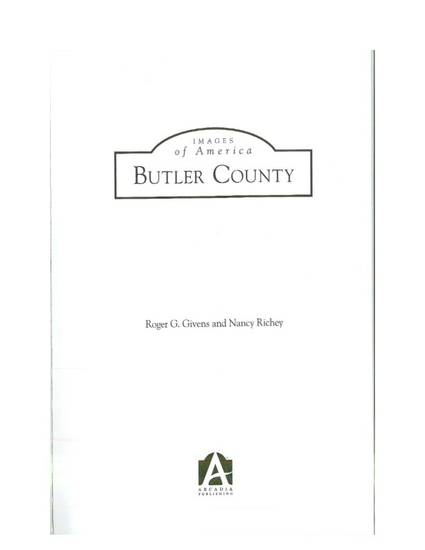 Butler County, located in the south-central part of the state, was the commonwealth’s 53rd county. Settlers moving into the area thought they had found “a little bit of heaven”—a virgin forest of oak, poplar, chestnut, hickory, and walnut and an abundance of wild game. Out of this wilderness developed a county rich in tradition, with many contributions to state and national history. It has been said that, for its population, the county has produced more notable people than any other in the nation. This list including two governors, an attorney general of Kentucky, a chief justice of the Kentucky Supreme Court, a US senator, three US representatives, a Congressional Medal of Honor recipient, two US Navy admirals, a Methodist bishop, and countless other equally productive citizens who proudly call Butler County home.

Nancy Richey is an Associate Professor and the Visual Resources Librarian for the Department of Library Special Collections at WKU. A native of Mt. Hermon, Kentucky, Richey has been a faculty member at WKU since July 2008. She is a graduate of the University of Kentucky and WKU where she received degrees in Information Science and Southern History. Richey has served on various historical boards, including Janice Holt Giles Society, Morrison Park Camp Meeting Site Restoration Board and the Daughters of the American Revolution. She loves local history and notes that it is not “national history writ small” but that the stories others may have thought “too small” to tell can also be saved in this way.