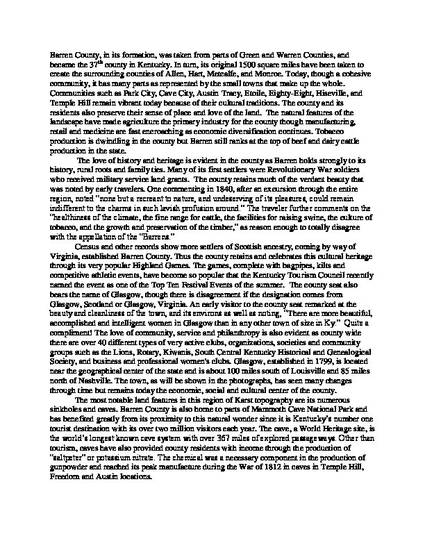 Book
Barren County
DLSC Faculty and Staff Book Gallery
Download
Description
Barren County, located in the heart of south central Kentucky, was formed in 1799 and is the commonwealth’s 13th largest county. Pioneers found the land without the usual, extensive wooded areas and so it looked barren to them in comparison. The area is anything but “barren,” as its land and population have been productive in agriculture, commerce, education, medicine, and the military. Voted in 2007 by Progressive Farmer magazine as the “Best Place to Live in Rural America,” the county has also produced one of the South’s first African American mayors, two governors, renowned musicians, a Pulitzer Prize winner, two Congressional Medal of Honor recipients, a major television network president, and a U.S. Air Force general. Countless other citizens, equally productive, proudly call Barren County their home.
ISBN
9780738585925
Publication Date
Publisher
Arcadia Publishing
Disciplines
Comments

Nancy Richey is an Associate Professor and the Visual Resources Librarian for the Department of Library Special Collections at WKU. A native of Mt. Hermon, Kentucky, Richey has been a faculty member at WKU since July 2008. She is a graduate of the University of Kentucky and WKU where she received degrees in Information Science and Southern History. Richey has served on various historical boards, including Janice Holt Giles Society, Morrison Park Camp Meeting Site Restoration Board and the Daughters of the American Revolution. She loves local history and notes that it is not “national history writ small” but that the stories others may have thought “too small” to tell can also be saved in this way.