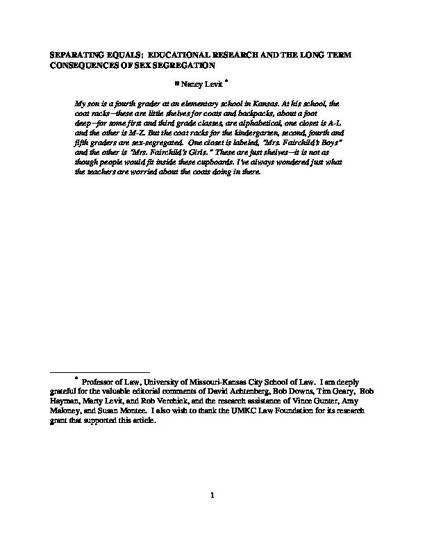 The article imports into the legal literature for the first time the full range of single sex education research, from this country and others, and examines sociological research that has been omitted from the debate. Rarely do proponents consider what educational and social effects sex-exclusive schooling will have on boys. Rarer still is any consideration of the effect of educational segregation in a society that is already relentlessly segregated by sex. While the educational research regarding the efficacy of single sex schools is mixed at best, the sociological research is absolutely clear that separation on the basis of identity characteristics creates feelings of individual inadequacy and instills beliefs about group hierarchy. Government separation of equals sends the message that something is contaminatory about the presence of the other (or, as we often say, "opposite") sex. Separating Equals analyzes whether, in light of this sociological and educational evidence, government sponsored sex segregation is constitutional. Proponents argue that equally equipped and funded sex exclusive schools offer a diversity of educational choices. This article examines what is meant by "diversity" in this context. Single sex education adds to diversity only in the sense that it increases the educational options in a school system. But then diversity simply means something other than coeducation within the classroom, in other words, sameness on the basis of sex. Proponents also argue that sex segregated education is a temporary remedy for educational inequities visited on girls. Separating Equals asks how we will make the transition from training students toward sex-exclusivity to preparing students for coeducational lives?