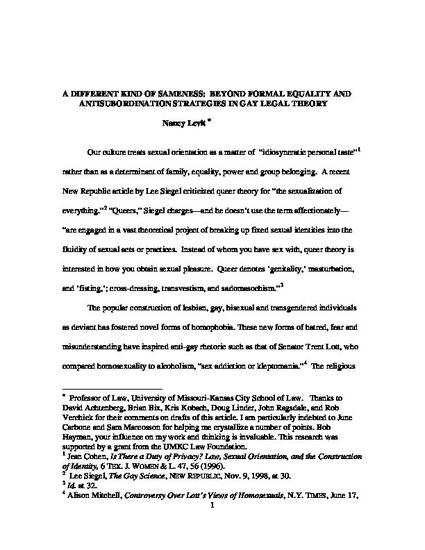 Gay legal theory is at a crossroads reminiscent of the sameness/difference debate in feminist circles and the integrationist debate in critical race theory. Formal equality theorists take the heterosexual model as the norm and then seek to show that gays, lesbians, bisexuals, and transsexuals - except for their choice of partners - are just like heterosexuals. Antisubordination theorists attack the heterosexual model itself and seek to show that a society that insists on such a model is unjust. Neither of these strategies is wholly satisfactory. The formal equality model will fail to bring about fundamental reforms as long as sexual minorities are perceived as different from straights, while the outsider model feeds perceptions of difference.

In A Different Kind of Sameness, Professor Nancy Levit explores the development of tolerance for sexual minorities, looking at both cultural signifiers and law. The grudging acceptance that is developing, both culturally and legally, is one of the hallmarks of the formation of an underclass group. The article suggests that the challenges for gay legal theory are twofold: to move away from the frailties of both formal equality and antisubordination theories, and to develop ways of representing sexual minorities that will make them more acceptable, if not valuable, in a broader cultural context.

Professor Levit proposes changing the rhetoric and doctrine of equality theory by developing a theory of respect for the common humanity of all people. Unlike antisubordination theory, shared humanity seeks assimilation into the dominant culture, while still resisting many of the culture's traditional institutions and interpretations. Unlike formal equality, a theory of shared humanity does not rest on the heterosexual norm. Instead, it draws on knowledge in anthropology, sociology, philosophy and psychology in the search for those qualities, characteristics, needs, and desires that make us - all of us - the same as people.