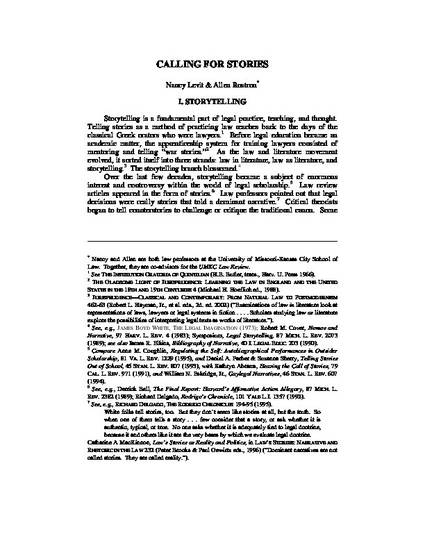 Storytelling is a fundamental part of legal practice, teaching, and thought. Telling stories as a method of practicing law reaches back to the days of the classical Greek orators. Before legal education became an academic matter, the apprenticeship system for training lawyers consisted of mentoring and telling war stories. As the law and literature movement evolved, it sorted itself into three strands: law in literature, law as literature, and storytelling. The storytelling branch blossomed.

Over the last few decades, storytelling became a subject of enormous interest and controversy within the world of legal scholarship. Law review articles appeared in the form of stories. Law professors pointed out that legal decisions were really stories that told a dominant narrative. Critical theorists began to tell counterstories to challenge or critique the traditional canon. Some used fictional stories as a method of analytical critique; others told accounts of actual events in ways that gave voice to the experiences of outsiders.

Storytelling began to make its way into legal education in new ways. For instance, a major textbook publisher developed a new series of books that recount the stories behind landmark cases in specific subject areas to help students appreciate not only the players in major cases, but also the social context in which cases arise. Meanwhile, Scott Turow, John Grisham, and a legion of other lawyers invaded the realm of popular fiction and conquered the bestseller lists.

Legal theorists began to recognize what historians and practicing lawyers had long known and what cognitive psychologists were just discovering the extraordinary power of stories. Stories are the way people, including judges and jurors, understand situations. People recall events in story form. Stories are educative; they illuminate different perspectives and evoke empathy. Stories create bonds; their evocative details engage people in ways that sterile legal arguments do not.

The UMKC Law Review plans to devote a section of one issue each year to stories. The Law Review is interested in publishing stories about personal experiences or lessons learned in legal practice, unique clients or enlightening client interactions, or enlightening episodes in legal education. In this introductory issue of the UMKC Law Review's stories section, we have been fortunate to collect stories from some of the founding parents of the storytelling movement and some of its best contemporary practitioners.