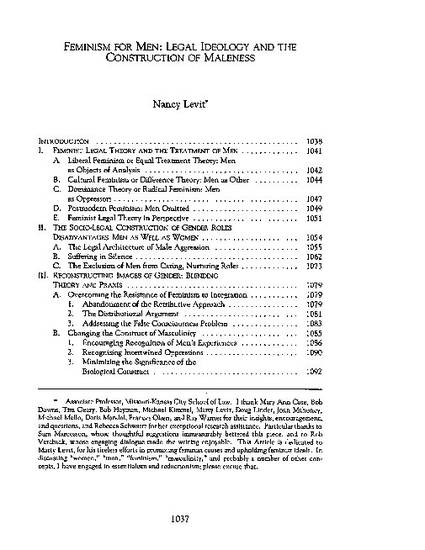 Article
Feminism for Men: Legal Ideology and the Construction of Maleness
UCLA Law Review (1996)
Download Find in your library
Abstract

It may seem a little odd to suggest that feminist theory has overlooked men. Yet, in several important respects, apart from the role of culprit, men have been largely omitted from feminism. Feminist legal theorists have paid mild attention to the "Can men be feminists?" question but this issue is usually relegated to footnotes. The negative effect gender role stereotypes have on men is typically subsidiary to the main focus of feminist legal literature, which has concentrated on documenting the patterns of subordination of women and on questions of feminist ideology.

The primary purpose of this article is to suggest that feminist legal theory needs to turn its attention to issues of relational justice: avoiding gender role stereotyping in both directions. To this end, the article evaluates how the different strands of feminist legal theory treat men. Over the course of the development of feminism, men have been treated as objects of analysis, as oppressors, or have simply been omitted. In significant part, the inattention to the situations of men was understandable. Perhaps to come into being, feminist theory had to carve out its own space. On the theoretical level, feminism is ready to take the next step and invite men into the discourse.

The second objective of this article is to explore the ways in which men are harmed by gender stereotypes. The article applies insights from feminist thought to situations in which gender role stereotypes operate to the detriment of men. Thus, the article considers the ways in which legal constructs and analysis have shaped masculinity. Maleness has been constructed in a number of ways by statutes, judicial decisions, and legal reasoning. One component of male aggression has been legal doctrines that dictate who society's criminals and warriors are. The image of masculinity is also formed by legal responses when men suffer injuries. Laws preventing male plaintiffs from suing for same-sex sexual harassment, and the lack of interest in male rape and spousal battery of men contribute to a climate in which men are taught to suffer in silence. In the areas of parental leave and child custody, men are socially and legally excluded from caring and nurturing roles. Various legal doctrines send distinct messages about what it means to be male. This cumulative legal ideology of masculinity is under-explored.

Finally, this article suggests ways that men and women can reconstruct a social world in which traditional gender roles diminish in importance. The point here is that for feminist objectives to succeed, they must become more all-encompassing. This article argues that feminism has stalled in an important way by not reaching far enough and it is not only possible for men to become feminists, but imperative that they do. By demonstrating some of the ways patriarchy harms men, I hope to encourage men to care about, and to work toward, the dismantling of patriarchy.