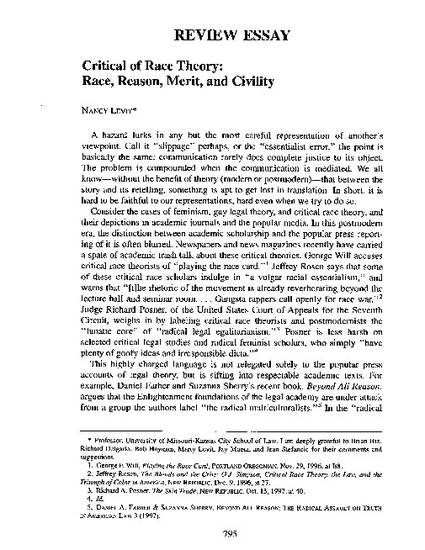 A hazard lurks in any but the most careful representation of another's viewpoint. Call it "slippage" or the "essentialist error," the point is that communication rarely does complete justice to its object. The problem is compounded when the communication is mediated. We all know that between a story and its retelling, something will get lost in translation. Consider feminism, gay legal theory, and critical race theory, and their depictions in academic journals and the popular media. Newspapers and news magazines have recently published a spate of academic trash talk accusing critical race theorists of "playing the race card" and indulging in "a vulgar racial essentialism." Judge Richard Posner labeled critical race theorists and postmodernists the "lunatic core" of "radical legal egalitarianism." Posner is less harsh on critical legal studies and radical feminist scholars, who simply "have plenty of goofy ideas and irresponsible dicta."

This highly charged language is also sifting into respectable academic texts. Daniel Farber and Suzanna Sherry's book, Beyond All Reason, argues that the Enlightenment foundations of the legal academy are under attack from "the radical multiculturalists" including feminist, gay and lesbian, and critical race scholars who attack traditional concepts of objective truth, reason, merit, and the rule of law. According to Farber and Sherry, these "extremists" believe that reality is socially constructed, condemn reason and truth "as components of white male domination," and prefer storytelling over rigorous analytic scholarship. What this "motley group" of diverse legal theorists has in common "is an abandonment of moderation and a dearth of common sense." These critiques of critical theories span the continua of reason and civility; what they share, however, is a tendency to caricature feminist, gay, and critical race theory, and to preempt the possibility of public dialogue. These critiques suggest a breakdown in the civility of academic discourse and an extraordinary tolerance of intolerance.

Using principles of reason--scientific method and logical or evidential evaluation-the essay examines whether "radical multiculturalists" engage in unreason when they urge a social constructionist or perspectival critique of systems of merit. The essay then explores the increasing intolerance critical theorists, particularly critical race theorists, face in response to their call for inclusion in society's collective decisionmaking. It concludes with a discussion of whether attention to reason and the process of academic discourse can promote more fruitful discussions between traditionalists and critical theorists.