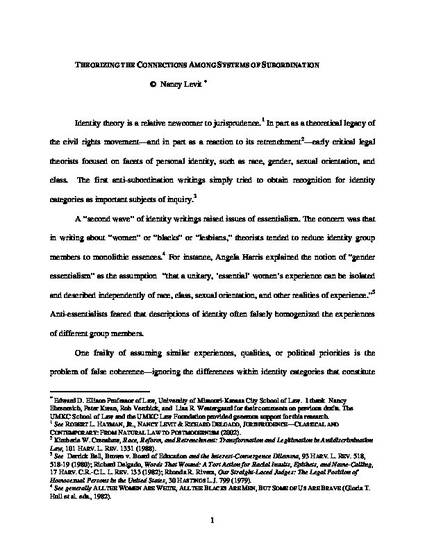 Theorizing the Connections Among Systems of Subordination introduces a symposium that addresses issues on the leading edge of identity theory, race theory, and critical social theory. It explains the concepts of anti-essentialism, intersectionality, multiple consciousness, multi-dimensionality, and post-intersectionality. It investigates the ways specific types of oppression - such as racism, sexism, classism, and homophobia - support and feed off of one another. It explores the dynamics of subordination that make different forms of subordination connected to each other - the mechanisms by which subordinating systems buttress each other. Where one sees sexism, one frequently can find racism; where classism exists, sexism often surfaces; and where there is patriarchy, there is often heterosexism. Theorizing the Connections Among Systems of Subordination recognizes the difficulties of forging political coalitions among groups whose interests are seemingly opposed.

The Symposium itself brings together noted critical theorists, centering on the work of Nancy Ehrenreich, who argues that various systems of subordination "are connected and mutually reinforcing." Sherene Razack, Frank Cooper, and Robert Westley build on Ehrenreich's hypothesis by applying it to specific contexts - respectively, brutality during peacekeeping missions in Somalia, the practice of "depolicing," and the slavery reparations movement. Frank Valdes ties Ehrenreich's institutional model to the workings of the capitalist marketplace. Sumi Cho challenges the political implications of the model by questioning inter-group unity among minority groups. Darren Lenard Hutchinson wants to resist the ways dominating structures reinforce each other so fluidly and effortlessly; he concentrates on applying theory to doctrine to suggest ways of revisiting equal protection analysis. Elvia Arriola, Sam Marcosson, Robert Chang, and Jerome McCristal Culp, Jr., focus on the prospects for political coalitions among subordinated groups. Joan Williams urges critical theorists to move beyond identity analysis to examine the ways major fields of social power shape . . . human interactions.