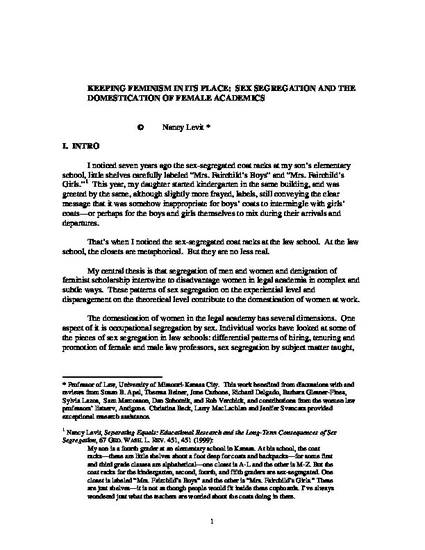 Article
Keeping Feminism in Its Place: Sex Segregation and the Domestication of Female Academics
Kansas Law Review (2001)
Download Find in your library
Abstract

The thesis of Keeping Feminism in Its Place is that women are being "domesticated" in the legal academy. This occurs in two ways, one theoretical and one very practical: denigration of feminism on the theoretical level and sex segregation of men and women on the experiential level intertwine to disadvantage women in academia in complex and subtle ways.

The article examines occupational sex segregation and role differentiation between male and female law professors, demonstrating statistically that in legal academia, women are congregated in lower-ranking, lower-paying, lower-prestige positions. It also traces how segregation by sex persists in substantive course teaching assignments. Female law professors are much more likely than male law professors to teach substantive courses addressing familial issues, as well as skills courses that demand intensive labor and student nurturing. In addition, female law professors are performing a disproportionate share of domestic chores within the law school relative to their numbers on faculties - they are doing more of the occupational equivalent of the "housework" and the "childcare" than their male counterparts. The article looks at the ways both women and men are disadvantaged by importing traditional domestic behaviors into the workplace.

This occupational segregation is coupled with a second pattern. Some feminists who espouse more radical or provocative theories suffer a different kind of domestication: a taming of the individuals through promotion and tenure processes and castigations in print of their more radical theorizing. Third, a number of traditional theorists have accused some feminists and other critical scholars of attacking reason because they urge acceptance of atypical points of view. These separate threads - concerning the roles of female academics, the career jeopardy for particularly radical feminists, and the assault on feminist theory as work lacking in reason - unite to keep feminism in its place.