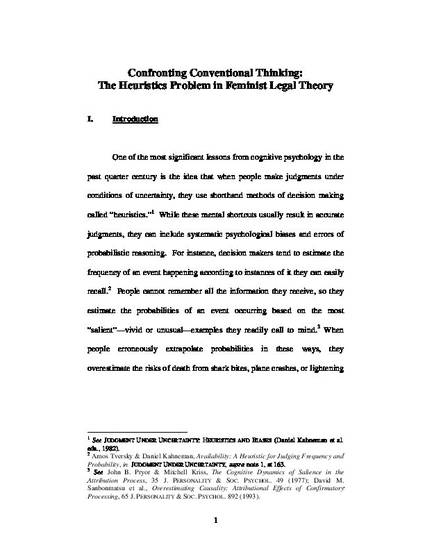 The thesis of The Heuristics Problem is that the societal problems about which identity theorists are most concerned often spring from and are reinforced by thinking riddled with heuristic errors. This article first investigates the ways heuristic errors influence popular perceptions of feminist issues. Feminists and critical race theorists have explored the cognitive bias of stereotyping, but have not examined the ways probabilistic errors can have gendered consequences. Second, The Heuristics Problem traces some of the ways cognitive errors have influenced the development of laws relating to gender issues. It explores instances in judicial decisions in which courts commit heuristic errors that have gendered effects. The third part of the article examines the cognitive literature on "debiasing" - techniques of educating decision-makers to reduce heuristic biases. This section asks whether it is possible to educate legal decision-makers to avoid heuristic errors. It is my hope that the explorations in this article can both strengthen the foundations of feminist legal theory and nudge feminist legal theorists away from narrow issue-based analyses toward broader ways of thinking about rationality. If feminists begin to assess problems not only as "gender issues," but also as empirically poorly reasoned, they may be in both stronger analytic and political positions. Hopefully, this examination will lead to greater understanding of the cognitive processes of discrimination and to the development of tools to combat subconscious cognitive errors. After all, much of the history of the civil rights movement has been a process of obtaining conscious control over subjective and damaging biases.