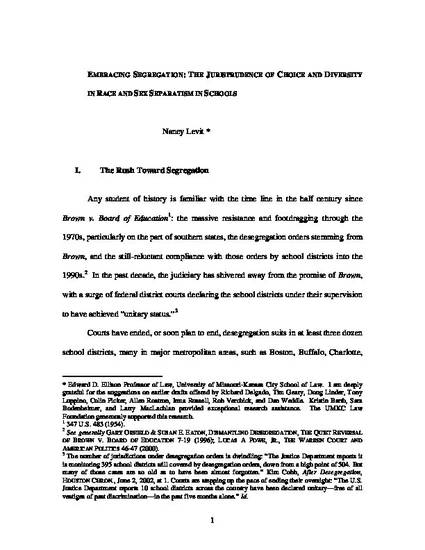 Article
Embracing Segregation: The Jurisprudence of Choice and Diversity in Race and Sex Separatism in Schools
University of Illinois Law Review (2005)
Download Find in your library
Abstract

Proponents of both single-sex and neighborhood schools urge tolerance of segregation as a matter of individual student and parent choice. For supporters of single-sex schools, this choice provides a diversity of educational options; for opponents of desegregation, this choice revives parents' unfettered autonomy with respect to their children's schooling. This article critiques the conflation of diversity with choice. The separatist educational movement mistakenly advances an option play concept of choice that masquerades as the constitutionally endorsed concept of diversity. Supporters of separatism try to divorce diversity from its origins as an integrative principle that brought together different types of people within an institution. The segregationist concept of diversity argues for differences among institutions, but within those institutions, demands homogeneity along the only dimension of identity that is being measured - race or sex.

The article returns to the message of Brown that separate educational facilities are inherently unequal - that official endorsement of segregation based on identity characteristics creates inequality. The article presents empirical evidence from the social sciences, as well as international experiences with gender and racial apartheid, about stigmatization from government sponsorship of separation, even under conditions of relative equality. Embracing Segregation also examines the ways contemporary separatism is usually presented without history or context. The article concludes that this country has insufficient distance from its segregative past and the ravages of those practices to vest separatism with new meaning. If the nation's past offers any lesson, surely it is that government separation of equals will recreate the very inequality that so many have fought so hard to overcome.