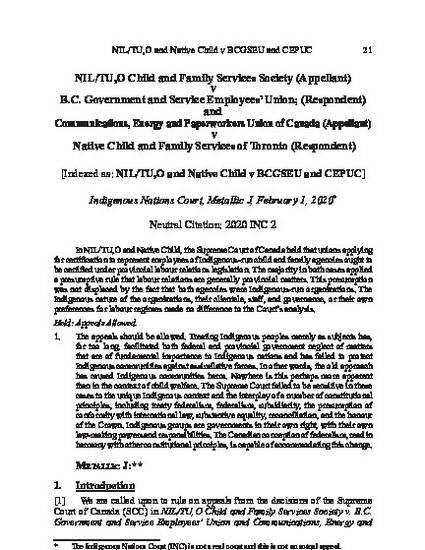 In NIL/TU,O and Native Child, the Supreme Court of Canada held that unions applying for certification to represent employees of Indigenous-run child and family agencies ought to be certified under provincial labour relations legislation. The majority in both cases applied a presumptive rule that labour relations are generally provincial matters. This presumption was not displaced by the fact that both agencies were Indigenous-run organizations. The Indigenous nature of the organizations, their clientele, staff, and governance, or their own preferences for labour regimes made no difference to the Court’s analysis.

The appeals should be allowed. Treating Indigenous peoples merely as subjects has, for too long, facilitated both federal and provincial government neglect of matters that are of fundamental importance to Indigenous nations and has failed to protect Indigenous communities against assimilative forces. In other words, the old approach has caused Indigenous communities harm. Nowhere is this perhaps more apparent than in the context of child welfare. The Supreme Court failed to be sensitive in these cases to the unique Indigenous context and the interplay of a number of constitutional principles, including treaty federalism, federalism, subsidiarity, the presumption of conformity with international law, substantive equality, reconciliation, and the honour of the Crown. Indigenous groups are governments in their own right, with their own law-making powers and responsibilities. The Canadian conception of federalism, read in harmony with other constitutional principles, is capable of accommodating this change.

*The Indigenous Nations Court (INC) is not a real court and this is not an actual appeal.