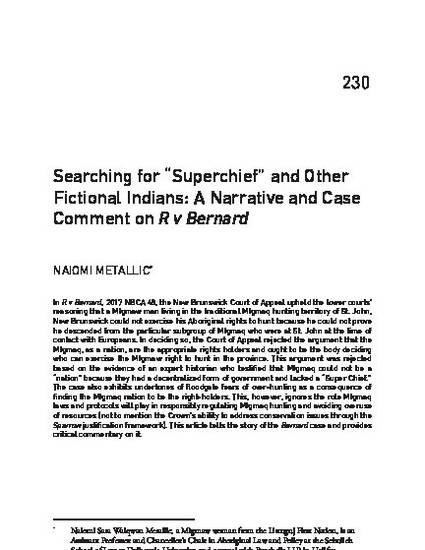 In R v Bernard, 2017 NBCA 48, the New Brunswick Court of Appeal upheld the lower courts’ reasoning that a Mìgmaw man living in the traditional Mìgmaq hunting territory of St. John, New Brunswick could not exercise his Aboriginal rights to hunt because he could not prove he descended from the particular subgroup of Mìgmaq who were at St. John at the time of contact with Europeans. In deciding so, the Court of Appeal rejected the argument that the Mìgmaq, as a nation, are the appropriate rights holders and ought to be the body deciding who can exercise the Mìgmaw right to hunt in the province. This argument was rejected based on the evidence of an expert historian who testified that Mìgmaq could not be a “nation” because they had a decentralized form of government and lacked a “Super Chief.” The case also exhibits undertones of floodgate fears of over-hunting as a consequence of finding the Mìgmaq nation to be the right-holders. This, however, ignores the role Mìgmaq laws and protocols will play in responsibly regulating Mìgmaq hunting and avoiding overuse of resources (not to mention the Crown’s ability to address conservation issues through the Sparrow justification framework). This article tells the story of the Bernard case and provides critical commentary on it.