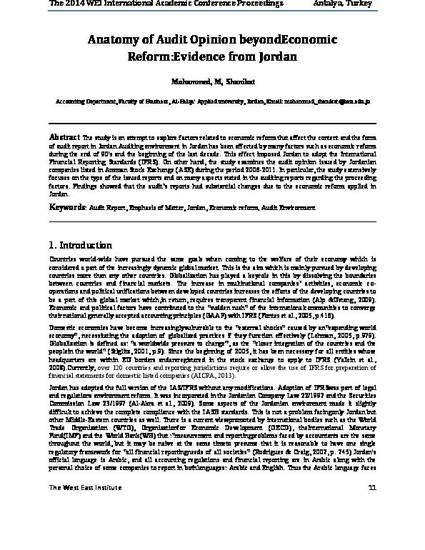 The study is an attempt to explore factors related to economic reform that affect the content and the form of audit report in Jordan.Auditing environment in Jordan has been affected by many factors such as economic reform during the end of 90's and the beginning of the last decade. This effect imposed Jordan to adopt the International Financial Reporting Standards (IFRS). On other hand, the study examines the audit opinion issued by Jordanian companies listed in Amman Stock Exchange (ASE) during the period 2006-2011. In particular, the study extensively focuses on the type of the issued reports and on many aspects stated in the auditing reports regarding the proceeding factors. Findings showed that the audit’s reports had substantial changes due to the economic reform applied in Jordan. Keywords: Audit Report, Emphasis of Matter, Jordan, Economic reform, Audit Environment