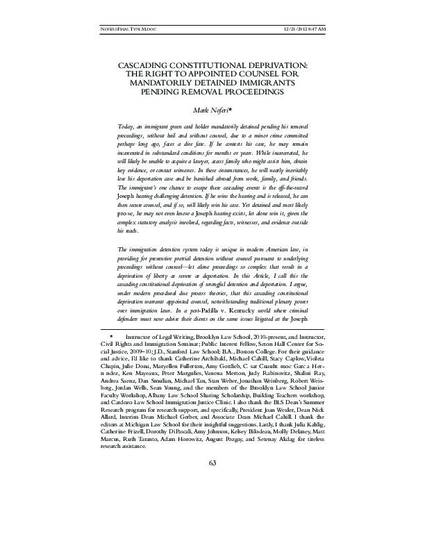 When a Department of Homeland Security officer mandatorily detains a green card holder without bail pending his removal proceedings, for a minor crime committed perhaps long ago, the immigrant’s life takes a drastic turn. If he contests his case, he likely will remain incarcerated in substandard conditions for months or years, often longer than for his original crime, and be unable to acquire a lawyer, access family whom might assist, or access key evidence or witnesses. In these circumstances, it is all but certain he will lose his deportation case, sometimes wrongfully, and be banished abroad from work, family, and friends. The immigrant’s one chance to escape these cascading events is the off-the-record “Joseph” hearing challenging detention. If he wins, is released, and can secure counsel, he likely will win his case to stay in America. Yet pro se and detained, he may not even be told the “Joseph” hearing exists, let alone win the hearing involving complex statutory analysis on facts, witnesses, and evidence relating to the conviction, now all outside his reach.

It is rare in modern American law that a non-lawyer’s decision causes so much to hang in the balance in such complex yet informal proceedings without a lawyer to challenge it. Indeed, the modern immigration detention system is uniquely rare, in peacetime or war, in providing for preventive pretrial detention without counsel pursuant to underlying proceedings without counsel. It creates a cascading risk of wrongful detention and deportation – one cognizable under modern procedural due process theories, even notwithstanding traditional plenary power over immigration laws. In a post-Padilla v. Kentucky world with an increasingly functionalist Constitutional view of deportation, and where criminal defenders now must advise on the same issues litigated at the Joseph hearing, a right to appointed counsel for mandatorily detained immigrants pending removal proceedings is constitutionally viable, practically feasible, and morally necessary.