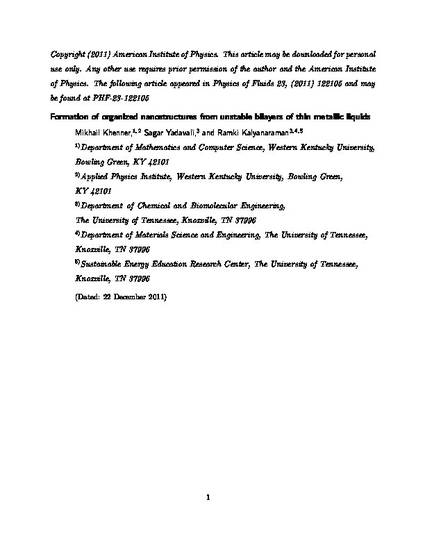 Dewetting of pulsed-laser irradiated, thin (< 20 nm), optically reflective metallic bilayers on an optically transparent substrate with a reflective support layer is studied within the lubrication equations model. A steady-state bilayer film thickness (h) dependent temperature profile is derived based on the mean substrate temperature estimated from the elaborate thermal model of transient heating and melting/freezing. Large thermocapillary forces are observed along the plane of the liquid-liquid and liquid-gas interfaces due to this h-dependent temperature, which, in turn, is strongly influenced by the h-dependent laser light reflection and absorption. Consequently the dewetting is a result of the competition between thermocapillary and intermolecular forces. A linear analysis of the dewetting length scales established that the non-isothermal calculations better predict the experimental results as compared to the isothermal case within the bounding Hamaker coefficients. Subsequently, a computational non-linear dynamics study of the dewetting pathway was performed for Ag/Co and Co/Ag bilayer systems to predict the morphology evolution. We found that the systems evolve towards formation of different morphologies, including core-shell, embedded, or stacked nanostructure morphologies.

Disciplines
Publication Date
Publisher Statement
Copyright (2011) American Institute of Physics. This article may be downloaded for personal use only. Any other use requires prior permission of the author and the American Institute of Physics. The following article appeared in Physics of Fluids 23, (2011) 122105 and may be found at http://link.aip.org/link/?PHF/23/122105
Citation Information
Mikhail Khenner, Sagar Yadavali and Ramki Kalyanaraman. "Formation of organized nanostructures from unstable bilayers of thin metallic liquids" Physics of Fluids Vol. 23 (2011)
Available at: http://works.bepress.com/mkhenner/12/