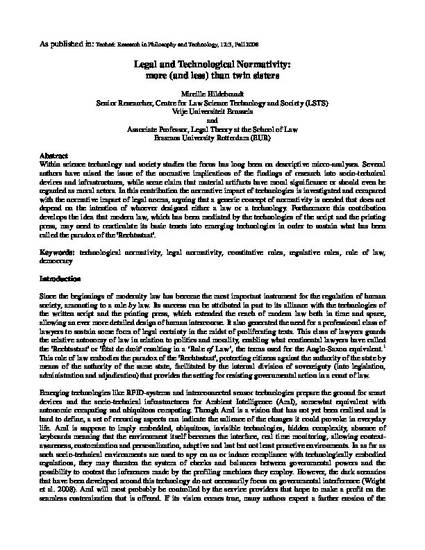 Within science technology and society studies the focus has long been on descriptive micro-analyses. Several authors have raised the issue of the normative implications of the findings of research into socio-technical devices and infrastructures, while some claim that material artifacts have moral significance or should even be regarded as moral actors. In this contribution the normative impact of technologies is investigated and compared with the normative impact of legal norms, arguing that a generic concept of normativity is needed that does not depend on the intention of whoever designed either a law or a technology. Furthermore this contribution develops the idea that modern law, which has been mediated by the technologies of the script and the printing press, may need to rearticulate its basic tenets into emerging technologies in order to sustain what has been called the paradox of the 'Rechtsstaat'