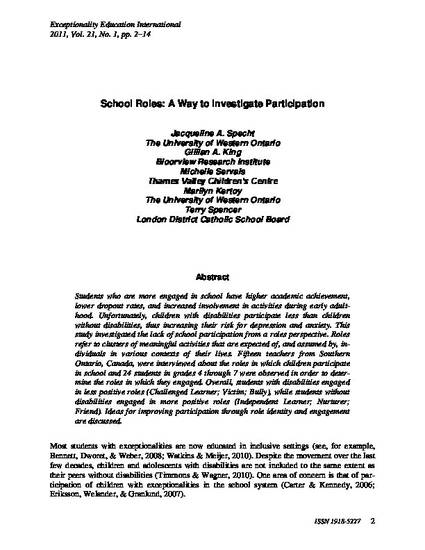 Students who are more engaged in school have higher academic achievement, lower dropout rates, and increased involvement in activities during early adult-hood. Unfortunately, children with disabilities participate less than children without disabilities, thus increasing their risk for depression and anxiety. This study investigated the lack of school participation from a roles perspective. Roles refer to clusters of meaningful activities that are expected of, and assumed by, in-dividuals in various contexts of their lives. Fifteen teachers from Southern Ontario, Canada, were interviewed about the roles in which children participate in school and 24 students in grades 4 through 7 were observed in order to deter-mine the roles in which they engaged. Overall, students with disabilities engaged in less positive roles (Challenged Learner; Victim; Bully), while students without disabilities engaged in more positive roles (Independent Learner; Nurturer; Friend). Ideas for improving participation through role identity and engagement are discussed.