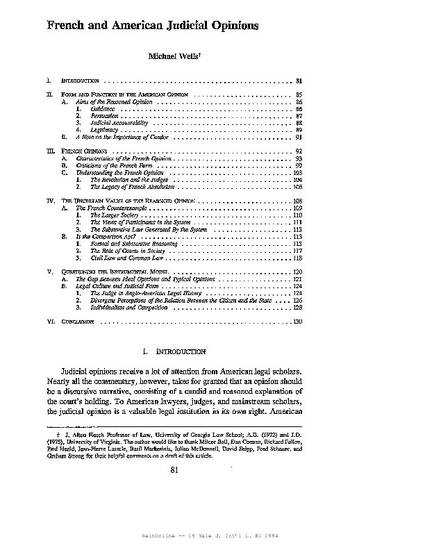 In this Article, I examine the foundations of American judicial form, in particular the proposition that powerful instrumental considerations support the issuance of reasoned opinions. This project proceeds from the belief that the form of judicial opinions deserves serious scholarly attention despite the broad consensus about its value, because it frames the terms of debate on every issue courts confront. My analysis is built on the view that critical insights into the nature of one's own legal system can be gleaned only by "understand[ing] what [one's] system is not," a task that requires putting aside the internal perspective of a participant and adopting instead the detached pose of a student of legal systems. Part II of this Article discusses a group of widely held beliefs regarding American judicial form. It identifies reason and candor as the central features of the ideal American opinion and describes how those features serve the desirable ends of providing guidance, persuading other participants in the legal process, constraining judges from abusing their power, and legitimating judicial creativity. Part III sketches the features of the standard French opinion. Especially in the highest courts, the French opinion is an uninformative syllogism of a few hundred words that purports to deduce the holding from a code or statutory provision. French opinions are neither reasoned nor candid and make no serious effort to realize the goals Americans consider important. Parts IV and V reexamine the premises behind the American opinion in light of French practice. Part IV argues that the very survival over time of French form should lead us to question whether reason and candor are as important in judicial opinions as we may think. The supposed benefits of American form--in particular persuasion and legitimacy--may be largely illusory. In any event, it is difficult to identify functional differences between the two legal systems that would justify French form for France and American form for America. Either the French system is inferior for failing to pursue persuasion and legitimacy, or Americans overstate the importance of those goals. Part V challenges the American conception of the judicial opinion as an instrument for achieving guidance, persuasion, legitimacy, and constraint. That conception may be based less on its merits than on our familiarity with it, our lack of knowledge of alternatives, and a tendency to confuse the very best judicial writing with the horde of ordinary opinions. Once we remove these blinders, we may conclude that American opinion form is as much an artifact of our history and culture as its French counterpart.