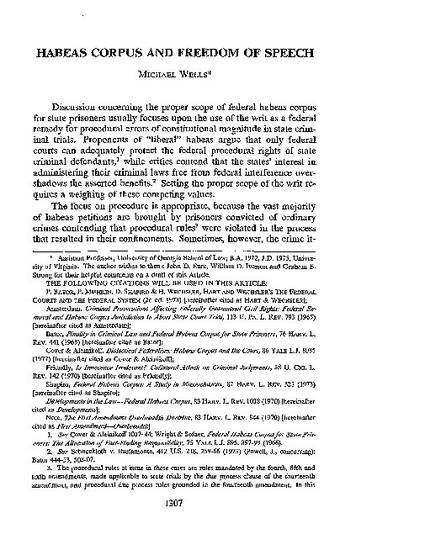 This Article will examine substantive attacks on habeas based on the assertion that the petitioner's confinement violates his first amendment rights of free speech, press or assembly. The thesis is that when these rights are at issue, the considerations supporting broad habeas are stronger, and the costs of habeas are lower, than when the petitioner is asserting the violation of a federal procedural right. As a result, the necessary choice of values is more easily resolved in favor of broad first amendment habeas than it is for broad procedural habeas. Essential to this analysis is the premise that a habeas court may legitimately distinguish among constitutional rights. This premise rests on the functional differences between habeas proceedings and appellate review, where such distinctions among rights are not permissible. The reasoning underlying the premise is developed in Part I. Part II describes the justifications for according distinctive and liberal treatment to free speech claims. Part III considers some of the possible consequences of drawing the suggested distinction between first amendment and procedural habeas. It is suggested that different rules might govern the cognizability of issues in habeas, as well as governing other aspects of habeas relief, such as custody, exhaustion of state remedies, prospective or retroactive application of new decisions, and procedural default. The proper approach to overbreadth review in habeas is also considered.