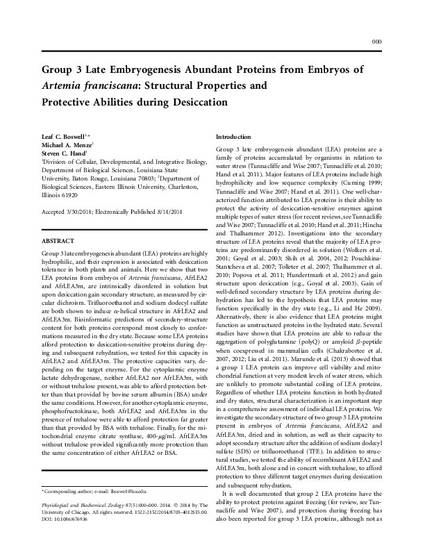 Group 3 late embryogenesis abundant (LEA) proteins are highly hydrophilic, and their expression is associated with desiccation tolerance in both plants and animals. Here we show that two LEA proteins from embryos of Artemia franciscana, AfrLEA2 and AfrLEA3m, are intrinsically disordered in solution but upon desiccation gain secondary structure, as measured by circular dichroism. Trifluoroethanol and sodium dodecyl sulfate are both shown to induce a-helical structure in AfrLEA2 and AfrLEA3m. Bioinformatic predictions of secondary-structure content for both proteins correspond most closely to conformations measured in the dry state. Because some LEA proteins afford protection to desiccation-sensitive proteins during drying and subsequent rehydration, we tested for this capacity in AfrLEA2 and AfrLEA3m. The protective capacities vary, depending on the target enzyme. For the cytoplasmic enzyme lactate dehydrogenase, neither AfrLEA2 nor AfrLEA3m, with or without trehalose present, was able to afford protection better than that provided by bovine serum albumin (BSA) under the same conditions. However, for another cytoplasmic enzyme, phosphofructokinase, both AfrLEA2 and AfrLEA3m in the presence of trehalose were able to afford protection far greater than that provided by BSA with trehalose. Finally, for the mitochondrial enzyme citrate synthase, 400-mg/mL AfrLEA3m without trehalose provided significantly more protection than the same concentration of either AfrLEA2 or BSA.

This article was originally published in Physiological and Biochemical Zoology, volume 87, issue 5, in 2014.