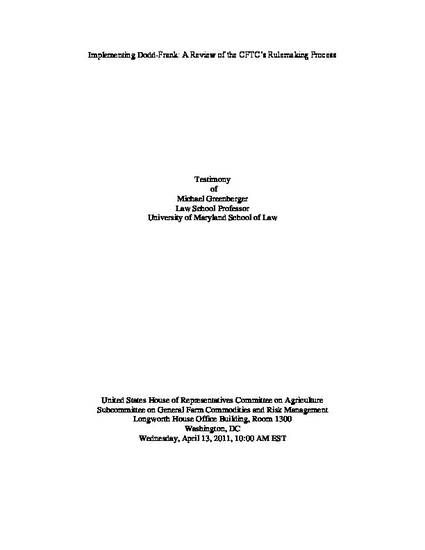 Abstract
The Relationship of Unregulated OTC Derivatives to the Meltdown. It is now accepted wisdom that it was the non-transparent, poorly capitalized, and almost wholly unregulated over-the-counter (“OTC”) derivatives market that lit the fuse that exploded the highly vulnerable worldwide economy in the fall of 2008. Because tens of trillions of dollars of these financial products were pegged to the economic performance of an overheated and highly inflated housing market, the sudden collapse of that market triggered under-capitalized or non-capitalized OTC derivative guarantees of the subprime housing investments. Moreover, the many undercapitalized insurers of that collapsing market had other multi-trillion dollar OTC derivatives obligations with thousands of financial counterparties (through unregulated interest rate, currency, foreign exchange, and energy derivatives). If a financial institution failed because it could not pay off some of these obligations, trillions of dollars of interconnected transactions would have also failed, causing a cascade of collapsing banks throughout the world. It was this potential of systemic failure that required the United States taxpayer to plug the huge capital hole that a daisy chain of nonpayments by the world’s largest financial institutions would have caused, thereby heading off the cratering of the world’s economy…
Disciplines
Citation Information
Michael Greenberger. "Implementing Dodd-Frank: A Review of the CFTC‟s Rulemaking Process: Testimony" (2011)
Available at: http://works.bepress.com/michael_greenberger/45/