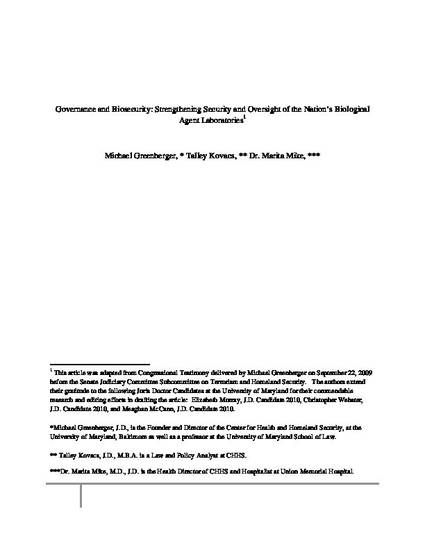 Since the advent of the Anthrax attacks in the fall of 2001, the United States has been confronted with a serious policy conundrum. On the one hand, we have strengthened programs that encourage the use of our best scientific resources to develop countermeasures to the weaponization of highly dangerous biopathogens. On the other hand, research on those countermeasures requires the use of the very biopathogens we seek to defeat. There have been many mishaps in the handling of those pathogens, which raises the frightening prospect that the research may be as (or more) dangerous than bioterrorist acts themselves. Indeed, the Anthrax attacks that motivated increased funding and research on biopathogens now seems likely to have been caused by research being conducted in the United States on Anthrax, an infectious disease caused by the bacteria Bacillus anthracis. Leaving aside which researcher evaded the security measures of the United States Army at its Fort Detrick laboratory facility, the forensic evidence appears very strong that an “insider” obtained the bacteria to perpetrate the 2001 attacks at that facility.

It is the thesis of this article that the United States can improve security measures at those biosafety level (“BSL”) laboratories that handle the most dangerous pathogens (“BSL-3” and “BSL-4” labs), so that laboratories can develop countermeasures to potential bioterror attacks without having that research inherently pose a threat to national security. This article makes recommendations in aid of such a policy. To put the recommendations in context, the article establishes the following foundational evidence: (1) a summary of statutory and regulatory mandates addressed to BSL-3 and BSL-4 labs; (2) a summary of leading reports that have been issued recommending improved biosecurity measures at those labs; and (3) a brief description of biosafety mishaps at BSL-3 and BSL-4 labs that have provoked the controversy at hand.

We conclude that Congress should enact legislation that will: (1) replace the present fragmented federal agency oversight system for biosafety laboratories by creating consolidated oversight responsibilities within a single agency; (2) through this agency, establish an accreditation system for BSL laboratories to ensure that they are operated safely and securely; (3) establish a reporting system that ensures all laboratory mishaps are promptly reported to, and promptly reviewed by, the oversight agency so that the facts pertaining to these mishaps can be made available in a meaningful way to other laboratories in a “lessons learned” modality; (4) improve the process of personnel reliability assessments; and (5) recognize that a “one-size fits all” model of compliance is too great a burden on most non-military BSL laboratories, and thus foster a private sector model of strong, but appropriate and practical, biosecurity procedures for those BSL labs.