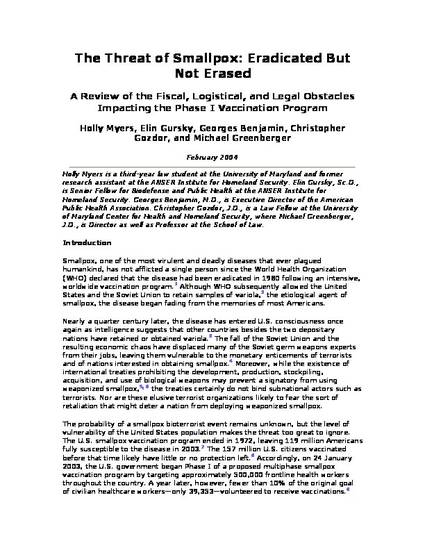 Abstract
Fears that terrorists may have the capabilities and intent to disseminate a variety of biologic agents has once again brought smallpox into the American consciousness. On December 13, 2002, recognizing that the global discontinuation of routine smallpox vaccination over two decades ago had left most Americans unprotected and vulnerable to the ravaging effects of the virus, the President announced a precautionary measure to begin vaccinating teams of emergency responders. The program commenced January 24, 2003. In the ensuing months, public health departments scrambled to meet the goal of vaccinating approximately 500,000 first responders, a protected phalanx that could quickly and effectively contain a smallpox outbreak by tracking and vaccinating exposed individuals and their close contacts. However, a formidable obstacle to achieving this goal arose, because the smallpox vaccine had a known range of mild to serious (sometimes life-threatening) side effects. By January 31, 2004, only 39,353 civilian first responders, fewer than 10 percent of the targeted individuals, had received smallpox vaccinations. In this Article, which is based on formal survey results, the authors review the fiscal, logistical, and legal obstacles that prevented the program from gaining momentum and achieving its initial goals.
Publication Citation
2004 Journal of Homeland Security (2004).
Disciplines
Citation Information
Holly L. Myers, Elin Gursky, Georges C. Benjamin, Christopher Gozdor, et al.. "The Threat of Smallpox: Eradicated But Not Erased: A Review of the Fiscal, Logistical and Legal Obstacles Impacting the Phase I Vaccination Program" (2004)
Available at: http://works.bepress.com/michael_greenberger/26/