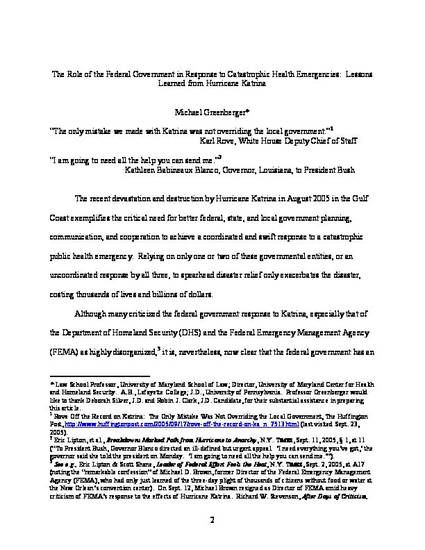 In much of the recent thought devoted to the role of states in responding to catastrophic public health emergencies, as most clearly evidenced by the commentary surrounding the Centers for Disease Control and Prevention- sponsored Model State Emergency Health Powers Act (Model Act), there is a focus on state governments being viewed as the exclusive controlling governmental agent supervising the governmental response. Much of that thinking is premised on a view of limitations placed on Congress’ power to act in public health emergencies emanating from Commerce Clause restrictions in the Supreme Court decisions of U.S. v. Lopez, 514 U.S. 549 (1995) and U.S. v. Morrison, 529 U.S. 598 (2000). This state-oriented focus has tended to blind state and local emergency responders to the substantial assets that can be deployed by the federal government either as an important supplement to the state and local response; or, in appropriate circumstances and under Congressional authority, that may preempt the state response if it is deemed ineffective by the federal government. Any purported commerce clause limitations are belied by a careful reading of the Supreme Court jurisprudence in this area and the fact that Congress itself has repeatedly authorized a prominent federal role in responding to incidents of national significance through a plethora of enactments. Moreover, the Department of Homeland Security’s National Response Plan (NRP) promulgated in December 2004 in response to a Congressional directive contemplates federal leadership in responding to catastrophic public health emergencies that could override conflicting state actions. The response to Hurricane Katrina only serves to buttress this point. The widely recognized federal ineffectiveness in initially reacting to Katrina has now driven the Bush Administration to state affirmatively that the federal government must assume the leading role in response to future major disasters, including possible use of the active military either pursuant to exceptions to the Posse Commitatus Act or proposed legislation designed to amend that statute. This article explores the issues surrounding the relationship between federal and state governments responding to catastrophic public health emergencies.