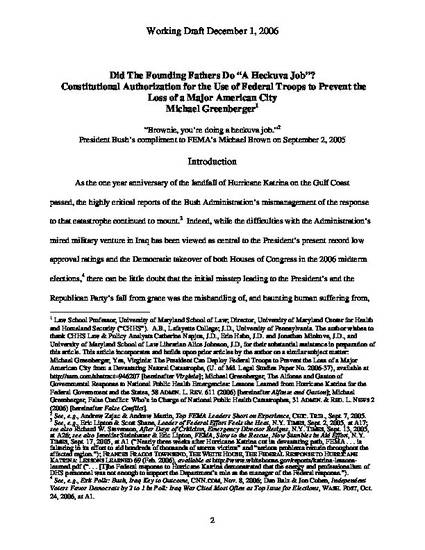 Article
Did the Founding Fathers Do "A Heckuva Job"? Constitutional Authorization for the Use of Federal Troops to Prevent the Loss of a Major American City
Schmooze 'tickets'
Download
Document Type
Article
Publication Date
Keywords
Comments

Abstract
As the one year anniversary of the landfall of Hurricane Katrina on the Gulf Coast passed, the highly critical reports of the Bush Administration's mismanagement of the response to that catastrophe continued to mount. Central to the criticism of the Administration was its indecisiveness in deploying military assets to rescue and protect Gulf Coast citizens overwhelmed by one of the country's worst natural disasters. The President failed to act because of a perceived lack of statutory and constitutional authority to override the Louisiana Governor's refusal to allow the Federal government to have ultimate control over the deployment of Federal troops and related Federal assets needed to confront the natural disaster. On October 17, 2006, all doubt about the statutory authority to use Federal troops to respond to a catastrophic natural disaster, even over the objection of the affected State, was resolved by the enactment of a key provision within the Defense Authorization Act for Fiscal Year 2007 which authorized the President to act unilaterally in this regard without the consent of the State when the State is unable to act on its own. It is the thesis of this article that constitutional justifications for this statute can be found within the Insurrection, Guarantee, Commerce and Necessary and Proper Clauses. The article further posits that this Constitutional question can be fully clarified by conditioning the considerable Federal aid given to the States in these disasters under the Stafford Act on the ability of the President to determine that Federal troops must be in control of the response to the disaster upon a Presidential finding that the State is incapable of taking charge of the response.
Citation Information
Michael Greenberger. "Did the Founding Fathers Do "A Heckuva Job"? Constitutional Authorization for the Use of Federal Troops to Prevent the Loss of a Major American City" (2006)
Available at: http://works.bepress.com/michael_greenberger/17/