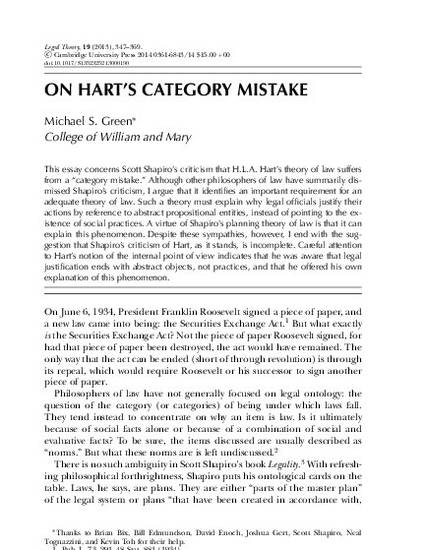 This essay concerns Scott Shapiro’s criticism that H.L.A. Hart’s theory of law suffers from a “category mistake.” Although other philosophers of law have summarily dismissed Shapiro’s criticism, I argue that it identifies an important requirement for an adequate theory of law. Such a theory must explain why legal officials justify their actions by reference to abstract propositional entities, instead of pointing to the existence of social practices. A virtue of Shapiro’s planning theory of law is that it can explain this phenomenon. Despite these sympathies, however, I end with the suggestion that Shapiro’s criticism of Hart, as it stands, is incomplete. Careful attention to Hart’s notion of the internal point of view indicates that he was aware that legal justification ends with abstract objects, not practices, and that he offered his own explanation of this phenomenon.