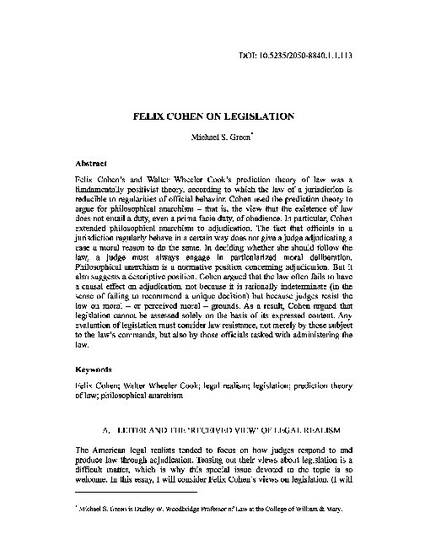 Felix Cohen's and Walter Wheeler Cook's prediction theory of law was a fundamentally positivist theory, according to which the law of a jurisdiction is reducible to regularities of official behavior. Cohen used the prediction theory to argue for philosophical anarchism - that is, the view that the existence of law does not entail a duty, even a prima facie duty, of obedience. In particular, Cohen extended philosophical anarchism to adjudication. The fact that officials in a jurisdiction regularly behave in a certain way does not give a judge adjudicating a case a moral reason to do the same. In deciding whether she should follow the law, a judge must always engage in particularized moral deliberation. Philosophical anarchism is a normative position concerning adjudication. But it also suggests a descriptive position. Cohen argued that the law often fails to have a causal effect on adjudication, not because it is rationally indeterminate (in the sense of failing to recommend a unique decision) but because judges resist the law on moral - or perceived moral - grounds. As a result, Cohen argued that legislation cannot be assessed solely on the basis of its expressed content. Any evaluation of legislation must consider law resistance, not merely by those subject to the law's commands, but also by those officials tasked with administering the law.