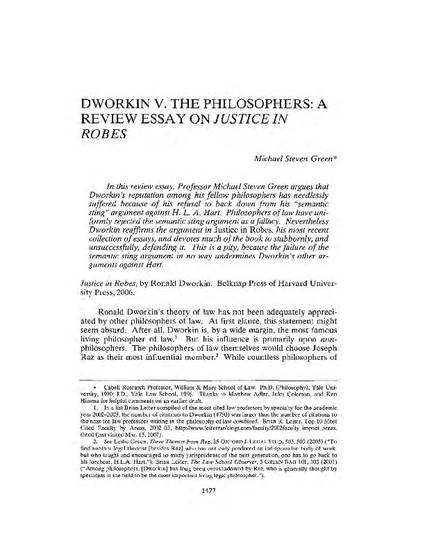 Article
Dworkin v. The Philosophers: A Review Essay on Justice in Robes
2007 University of Illinois Law Review 1477-1503
Download Find in your library
Abstract

In this review essay, Professor Michael Steven Green argues that Dworkin's reputation among his fellow philosophers has needlessly suffered because of his refusal to back down from his "semantic sting" argument against H. L. A. Hart. Philosophers of law have uniformly rejected the semantic sting argument as a fallacy. Nevertheless Dworkin reaffirms the argument in Justice in Robes, his most recent collection of essays, and devotes much of the book to stubbornly, and unsuccessfully, defending it. This is a pity, because the failure of the semantic sting argument in no way undermines Dworkin's other arguments against Hart.