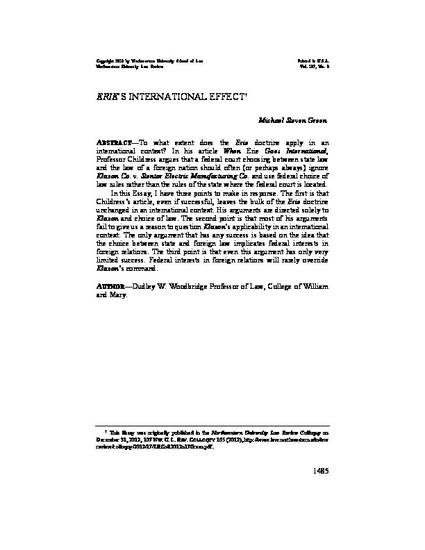 To what extent does the Erie doctrine apply in an international context? In his article When Erie Goes International, Professor Childress argues that a federal court choosing between state law and the law of a foreign nation should often (or perhaps always) ignore Klaxon Co. v. Stentor Electric Manufacturing Co. and use federal choice of law rules rather than the rules of the state where the federal court is located.

In this Essay, I have three points to make in response. The first is that Childress’s article, even if successful, leaves the bulk of the Erie doctrine unchanged in an international context. His arguments are directed solely to Klaxon and choice of law. The second point is that most of his arguments fail to give us a reason to question Klaxon’s applicability in an international context. The only argument that has any success is based on the idea that the choice between state and foreign law implicates federal interests in foreign relations. The third point is that even this argument has only very limited success. Federal interests in foreign relations will rarely override Klaxon’s command.