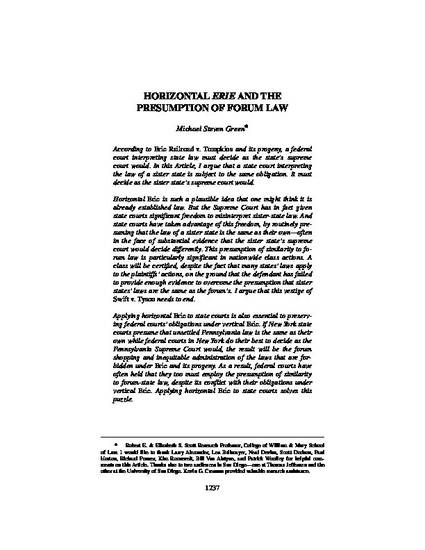 Horizontal Erie is such a plausible idea that one might think it is
already established law. But the Supreme Court has in fact given
state courts significant freedom to misinterpret sister-state law. And
state courts have taken advantage of this freedom, by routinely presuming
that the law of a sister state is the same as their own—often
in the face of substantial evidence that the sister state’s supreme
court would decide differently. This presumption of similarity to forum
law is particularly significant in nationwide class actions. A
class will be certified, despite the fact that many states’ laws apply
to the plaintiffs’ actions, on the ground that the defendant has failed
to provide enough evidence to overcome the presumption that sister
states’ laws are the same as the forum’s. I argue that this vestige of
Swift v. Tyson needs to end.

Applying horizontal Erie to state courts is also essential to preserving
federal courts’ obligations under vertical Erie. If New York state
courts presume that unsettled Pennsylvania law is the same as their
own while federal courts in New York do their best to decide as the
Pennsylvania Supreme Court would, the result will be the forum
shopping and inequitable administration of the laws that are forbidden
under Erie and its progeny. As a result, federal courts have
often held that they too must employ the presumption of similarity
to forum-state law, despite its conflict with their obligations under
vertical Erie. Applying horizontal Erie to state courts solves this
puzzle.