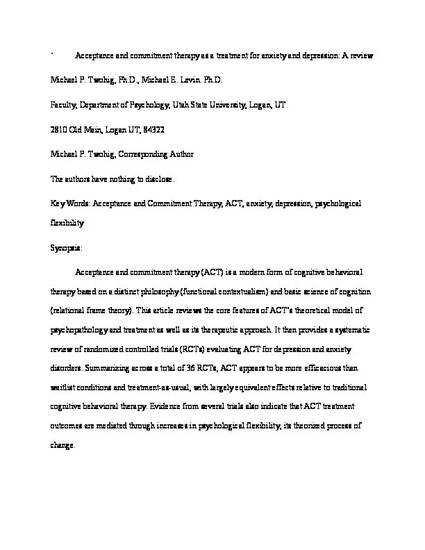 Acceptance and commitment therapy (ACT) is a modern form of cognitive behavioral therapy based on a distinct philosophy (functional contextualism) and basic science of cognition (relational frame theory). This article reviews the core features of ACT’s theoretical model of psychopathology and treatment as well as its therapeutic approach. It then provides a systematic review of randomized controlled trials (RCTs) evaluating ACT for depression and anxiety disorders. Summarizing across a total of 36 RCTs, ACT appears to be more efficacious than waitlist conditions and treatment-as-usual, with largely equivalent effects relative to traditional cognitive behavioral therapy. Evidence from several trials also indicate that ACT treatment outcomes are mediated through increases in psychological flexibility, its theorized process of change.

Acceptance and commitment therapy (ACT)1 is part of a larger research approach called Contextual Behavioral Sciences (CBS). Those with a CBS focus to their work generally adhere to a behavior-analytic theoretical orientation, and as such have a strong interest in the basic science that informs the techniques used in therapy. Behavior analysis traditionally focused on the use or contingency management procedures to modify overt actions, and did not have a conceptualization of the role of cognition other than it being another form of behavior that was reinforced by the verbal community.2 This differs from CBS in that, the most active line of basic research is a behavioral account of language and cognition called relational frame theory (RFT).3 RFT has been an active line of research since the 1970’s when it was called stimulus equivalence.4 Since that time, RFT research has expanded and provides a method to study language and cognition, and inform behavioral interventions. To put it simply, ACT as described in this paper, is modern behavior analysis applied to clinical issues including anxiety and depression. This manuscript will review the foundations of ACT, its theoretical model of psychopathology and treatment, and the empirical evidence for ACT as a treatment of anxiety and depressive disorders.