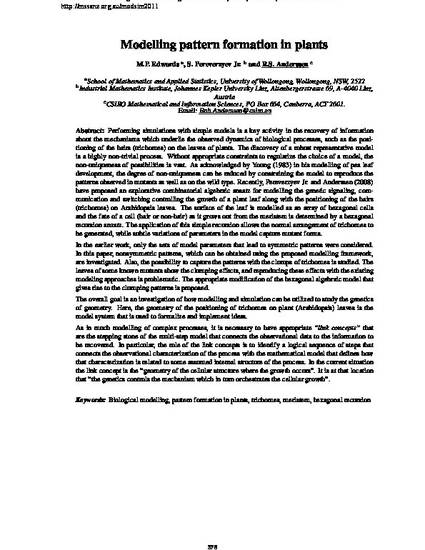 Abstract
Performing simulations with simple models is a key activity in the recovery of information about the mechanisms which underlie the observed dynamics of biological processes, such as the posi- tioning of the hairs (trichomes) on the leaves of plants. The discovery of a robust representative model is a highly non-trivial process. Without appropriate constraints to regularize the choice of a model, the non-uniqueness of possibilities is vast. As acknowledged by Young (1983) in his modelling of pea leaf development, the degree of non-uniqueness can be reduced by constraining the model to reproduce the patterns observed in mutants as well as on the wild type. Recently, Pereverzyev Jr. and Anderssen (2008) have proposed an explorative combinatorial algebraic ansatz for modelling the genetic signaling, com- munication and switching controlling the growth of a plant leaf along with the positioning of the hairs (trichomes) on Arabidopsis leaves. The surface of the leaf is modelled as an array of hexagonal cells and the fate of a cell (hair or non-hair) as it grows out from the meristem is determined by a hexagonal recursion anzatz. The application of this simple recursion allows the normal arrangement of trichomes to be generated, while subtle variations of parameters in the model capture mutant forms. In the earlier work, only the sets of model parameters that lead to symmetric patterns were considered. In this paper, nonsymmetric patterns, which can be obtained using the proposed modelling framework, are investigated. Also, the possibility to capture the patterns with the clumps of trichomes is studied. The leaves of some known mutants show the clumping effects, and reproducing these effects with the existing modeling approaches is problematic. The appropriate modification of the hexagonal algebraic model that gives rise to the clumping patterns is proposed. The overall goal is an investigation of how modelling and simulation can be utilized to study the genetics of geometry. Here, the geometry of the positioning of trichomes on plant (Arabidopsis) leaves is the model system that is used to formalize and implement ideas. As in much modelling of complex processes, it is necessary to have appropriate "link concepts" that are the stepping stone of the multi-step model that connects the observational data to the information to be recovered. In particular, the role of the link concepts is to identify a logical sequence of steps that connects the observational characterization of the process with the mathematical model that defines how that characterization is related to some assumed internal structure of the process. In the current situation the link concept is the "geometry of the cellular structure where the growth occurs". It is at that location that "the genetics controls the mechanism which in turn orchestrates the cellular growth".
Link to publisher version (URL)
International Congress on Modelling and Simulation
Disciplines
Citation Information
M P Edwards, S Pereverzyev and R S Anderssen. "Modelling pattern formation in plants" (2011) p. 378 - 384
Available at: http://works.bepress.com/medwards/1/