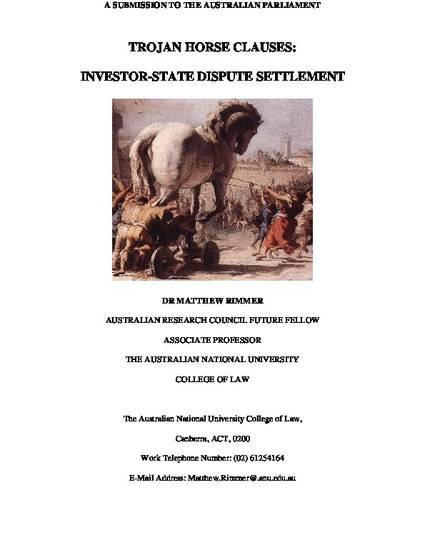 ‘The Trans-Pacific Partnership (TPP) proposes to freeze into a binding trade agreement many of the worst features of the worst laws in the TPP countries, making needed reforms extremely difficult if not impossible. The investor state dispute resolution mechanisms should not be shrouded in mystery to the general public, while the same provisions are routinely discussed with advisors to big corporations.’ Professor Joseph Stiglitz, Nobel Laureate in Economics

‘Investment arbitration as currently constituted is not a fair, independent, and balanced method for the resolution of disputes between sovereign nations and private investors.’ Retired Justice Elizabeth Evatt and leading jurists

‘Opening Australian governments to lawsuits over resource extraction, foreign land purchases, pharmaceutical benefits and health measures is a potential minefield for the government.’ Peter Martin, Economist for The Age and The Sydney Morning Herald

‘Investor state dispute settlement (ISDS) is a subsidy for multinational corporations and a tax on everyone else.’ Daniel Ikensen, the Cato Institute

“The Trans-Pacific Partnership (TPP) negotiators should consider the rights of everyone affected by the deal and act in the public interest, not just the special interests of the economic players that stand to benefit the most.” UN Special Rapporteur on the Right to Food, Olivier De Schutter, and Kaitlin Cordes

Recommendation 1 In light of the Productivity Commission report, the Australian Government and Parliament should seek to exclude investment clauses from trade agreements and investment agreements, as recommended by the Trade and Foreign Investment (Protecting the Public Interest) Bill 2014 (Cth).

Recommendation 3 Investment clauses could be used and abused by Big Tobacco. The World Health Organization and tobacco control advocates have warned that Big Tobacco has sought to use investment clauses to challenge tobacco control measures, such as graphic health warnings and plain packaging of tobacco products, and frustrate the implementation of the World Health Organization Framework Convention on Tobacco Control.

Recommendation 4 There has been much controversy over the Trans-Pacific Partnership, intellectual property, investment, and pharmaceutical drugs. There has been much concern that investment clauses could be deployed to challenge domestic law reforms – such as those proposed in the independent Pharmaceutical Patents Review Report. The dispute between Eli Lilly v. Canada highlights the dangers of investment clauses in this field.

Recommendation 5 UNITAID, public health advocates, intellectual property experts, and legislators have all expressed concern about the impact of investment clauses upon access to essential medicines – especially in respect of HIV/AIDS, tuberculosis, and malaria, and neglected diseases.

Recommendation 6 As highlighted by the dispute between Lone Pine Resources v. Canada, gas companies have deployed investment clauses to challenge regulations and moratoria in respect of coal seam gas and mining. This raises larger questions about public regulation in respect of land, water, and the environment.

Recommendation 7 Investment clauses could undermine and undercut public regulation in respect of the environment, biodiversity, and climate change.

Recommendation 8 Investment clauses could be deployed in the field of agriculture. Big food and soda companies could question food nutrition labelling laws. Foreign biotechnology companies could challenge GM food labelling laws. Multinational agricultural companies could question Australian agricultural policies. The United Nations Special Rapporteur on the Right to Food, Olivier De Schutter, has raised larger issues about the impact of trade deals like the Trans-Pacific Partnership upon food security, nutrition, hunger, and the right to food.

Recommendation 10 Investment clauses could be invoked in relation to foreign investment in respect of confidential information, trade secrets, and data protection (particularly in respect of agriculture and pharmaceutical drugs). This could raise issues in respect of regulatory review.

Recommendation 11 There is a need to ensure that investment clauses are not deployed against financial regulations, particularly in the wake of the Global Financial Crisis.

Recommendation 13 In light of the dispute in Metalclad v. Mexico, investor-state dispute settlement clauses could threaten local, state, and territory government laws and regulations in Australia.