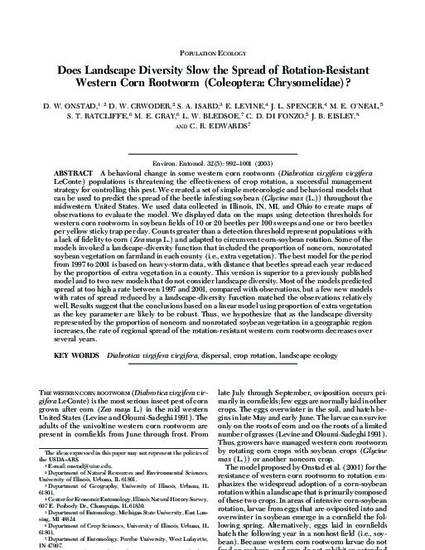 A behavioral change in some western corn rootworm (Diabrotica virgifera virgifera LeConte) populations is threatening the effectiveness of crop rotation, a successful management strategy for controlling this pest. We created a set of simple meteorologic and behavioral models that can be used to predict the spread of the beetle infesting soybean (Glycine max (L.)) throughout the midwestern United States. We used data collected in Illinois, IN, MI, and Ohio to create maps of observations to evaluate the model. We displayed data on the maps using detection thresholds for western corn rootworm in soybean fields of 10 or 20 beetles per 100 sweeps and one or two beetles per yellow sticky trap per day. Counts greater than a detection threshold represent populations with a lack of fidelity to corn (Zea mays L.) and adapted to circumvent corn-soybean rotation. Some of the models invoked a landscape-diversity function that included the proportion of noncorn, nonrotated soybean vegetation on farmland in each county (i.e., extra vegetation). The best model for the period from 1997 to 2001 is based on heavy-storm data, with distance that beetles spread each year reduced by the proportion of extra vegetation in a county. This version is superior to a previously published model and to two new models that do not consider landscape diversity. Most of the models predicted spread at too high a rate between 1997 and 2001, compared with observations, but a few new models with rates of spread reduced by a landscape-diversity function matched the observations relatively well. Results suggest that the conclusions based on a linear model using proportion of extra vegetation as the key parameter are likely to be robust. Thus, we hypothesize that as the landscape diversity represented by the proportion of noncorn and nonrotated soybean vegetation in a geographic region increases, the rate of regional spread of the rotation-resistant western corn rootworm decreases over several years.

Keywords
Disciplines
Publication Date
Publisher Statement
This article is the copyright property of the Entomological Society of America and may not be used for any commercial or other private purpose without specific written permission of the Entomological Society of America.
Citation Information
D. W. Onstad, D. W. Crwoder, S. A. Isard, E. Levine, et al.. "Does Landscape Diversity Slow the Spread of Rotation-Resistant Western Corn Rootworm (Coleoptera: Chrysomelidae)?" Environmental Entomology Vol. 32 Iss. 5 (2003)
Available at: http://works.bepress.com/matthew_oneal/19/