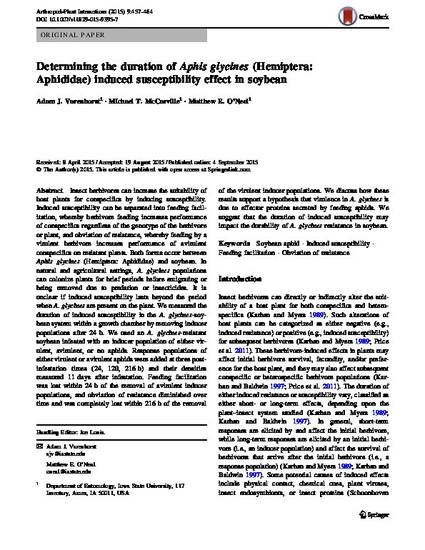 Insect herbivores can increase the suitability of host plants for conspecifics by inducing susceptibility. Induced susceptibility can be separated into feeding facilitation, whereby herbivore feeding increases performance of conspecifics regardless of the genotype of the herbivore or plant, and obviation of resistance, whereby feeding by a virulent herbivore increases performance of avirulent conspecifics on resistant plants. Both forms occur between Aphis glycines (Hemiptera: Aphididae) and soybean. In natural and agricultural settings, A. glycines populations can colonize plants for brief periods before emigrating or being removed due to predation or insecticides. It is unclear if induced susceptibility lasts beyond the period when A. glycines are present on the plant. We measured the duration of induced susceptibility in the A. glycines-soybean system within a growth chamber by removing inducer populations after 24 h. We used an A. glycines-resistant soybean infested with an inducer population of either virulent, avirulent, or no aphids. Response populations of either virulent or avirulent aphids were added at three post-infestation times (24, 120, 216 h) and their densities measured 11 days after infestation. Feeding facilitation was lost within 24 h of the removal of avirulent inducer populations, and obviation of resistance diminished over time and was completely lost within 216 h of the removal of the virulent inducer populations. We discuss how these results support a hypothesis that virulence in A. glycines is due to effector proteins secreted by feeding aphids. We suggest that the duration of induced susceptibility may impact the durability of A. glycines resistance in soybean.