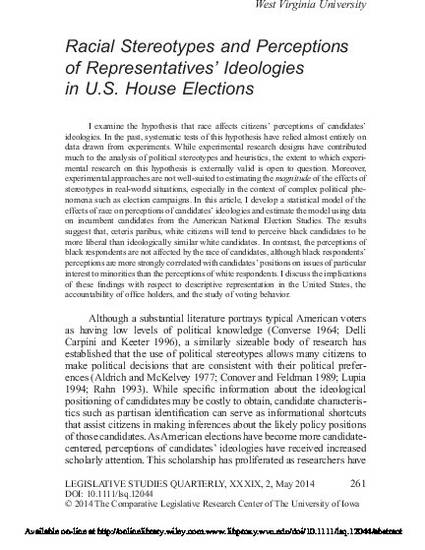 I examine the hypothesis that race affects citizens' perceptions of candidates' ideologies. In the past, systematic tests of this hypothesis have relied almost entirely on data drawn from experiments. While experimental research designs have contributed much to the analysis of political stereotypes and heuristics, the extent to which experimental research on this hypothesis is externally valid is open to question. Moreover, experimental approaches are not well-suited to estimating the magnitude of the effects of stereotypes in real-world situations, especially in the context of complex political phenomena such as election campaigns. In this paper, I develop a statistical model of the effects of race on perceptions of candidates' ideologies and estimate the model using data on incumbent candidates from the American National Election Studies. The results suggest that, ceteris paribus, white citizens will tend to perceive black candidates to be more liberal than ideologically similar white candidates. In contrast, the perceptions of black respondents are not affected by the race of candidates, although black respondents' perceptions are more strongly correlated with candidates' positions on issues of particular interest to minorities than the perceptions of white respondents. I discuss the implications of these findings with respect to descriptive representation in the United States, the accountability of office holders, and the study of voting behavior.