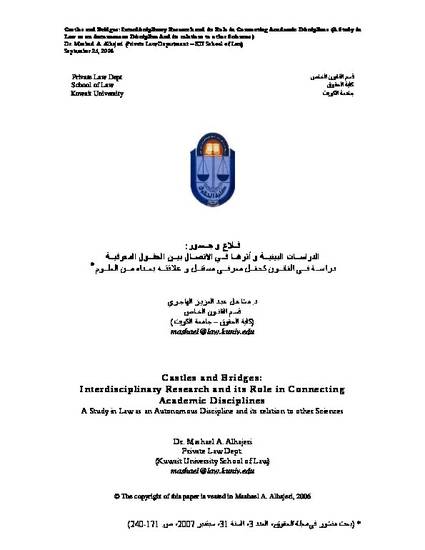 Castles and Bridges: Interdisciplinary Research and its Role in Connecting Academic Disciplines - A Study in Law as an Autonomous Discipline and its relation to other Sciences

The classic classification of knowledge into disciplines is an old academic tradition that dates back to the times of ancient Greece. This taxonomy survived until the middle ages, and was well established during the renaissance. Its characteristics where defined with the development of social sciences and humanities, which evolved in the late nineteenth and twentieth centuries.

The driving force behind the constant change in the boundaries between the said disciplines is the dynamic and ever changing demands of the modern society which, due to its complex nature, constantly required higher levels of specialisation.

Within this context, it is noticed that law, as an autonomous discipline, is characterised with a distinct nature that occasionally defies classification. In this respect, it is worth the mention that legal academics, unlike their peers in other disciplines, are not ‘producers’ of knowledge, in that they do not conduct experiments, nor do they come up with information that was not previously unknown. Rather, they study the data that is available at the disposal of decision makers, analyse it, and then present their findings to judges, legislatures, and law students. It is in this connection that law’s need to interact with other disciplines is evident (particularly social sciences, such as economics, sociology, and political science), in order to better understand and revaluate these findings

Thus, the present paper proposes to elucidate the prospect of studying the law from an external perspective that investigates its connections with other disciplines. It is a perspective that did not manifest itself until the seventies of the twentieth century, through the relatively ‘new’ method of research known as ‘Interdisciplinarity’.