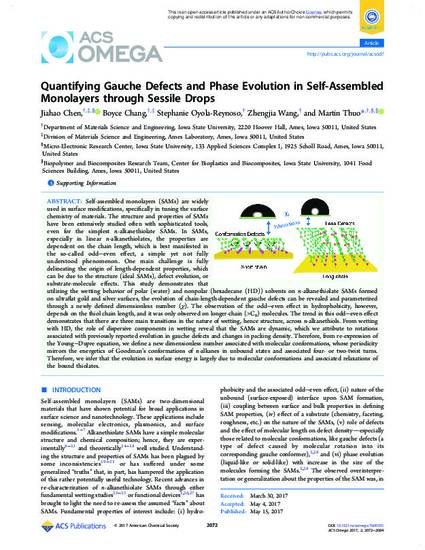 Self-assembled monolayers (SAMs) are widely used in surface modifications, specifically in tuning the surface chemistry of materials. The structure and properties of SAMs have been extensively studied often with sophisticated tools, even for the simplest n-alkanethiolate SAMs. In SAMs, especially in linear n-alkanethiolates, the properties are dependent on the chain length, which is best manifested in the so-called odd–even effect, a simple yet not fully understood phenomenon. One main challenge is fully delineating the origin of length-dependent properties, which can be due to the structure (ideal SAMs), defect evolution, or substrate-molecule effects. This study demonstrates that utilizing the wetting behavior of polar (water) and nonpolar (hexadecane (HD)) solvents on n-alkanethiolate SAMs formed on ultraflat gold and silver surfaces, the evolution of chain-length-dependent gauche defects can be revealed and parameterized through a newly defined dimensionless number (χ). The observation of the odd–even effect in hydrophobicity, however, depends on the thiol chain length, and it was only observed on longer-chain (>C8) molecules. The trend in this odd–even effect demonstrates that there are three main transitions in the nature of wetting, hence structure, across n-alkanethiols. From wetting with HD, the role of dispersive components in wetting reveal that the SAMs are dynamic, which we attribute to rotations associated with previously reported evolution in gauche defects and changes in packing density. Therefore, from re-expression of the Young–Dupre equation, we define a new dimensionless number associated with molecular conformations, whose periodicity mirrors the energetics of Goodman’s conformations of n-alkanes in unbound states and associated four- or two-twist turns. Therefore, we infer that the evolution in surface energy is largely due to molecular conformations and associated relaxations of the bound thiolates.