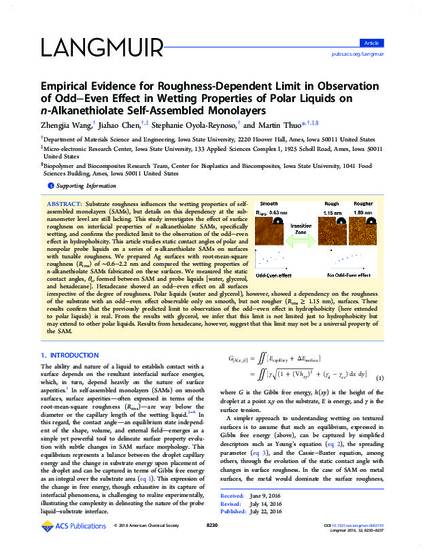 Substrate roughness influences the wetting properties of self-assembled monolayers (SAMs), but details on this dependency at the sub-nanometer level are still lacking. This study investigates the effect of surface roughness on interfacial properties of n-alkanethiolate SAMs, specifically wetting, and confirms the predicted limit to the observation of the odd–even effect in hydrophobicity. This article studies static contact angles of polar and nonpolar probe liquids on a series of n-alkanethiolate SAMs on surfaces with tunable roughness. We prepared Ag surfaces with root-mean-square roughness (Rrms) of ∼0.6–2.2 nm and compared the wetting properties of n-alkanethiolate SAMs fabricated on these surfaces. We measured the static contact angles, θs, formed between SAM and probe liquids [water, glycerol, and hexadecane]. Hexadecane showed an odd–even effect on all surfaces irrespective of the degree of roughness. Polar liquids (water and glycerol), however, showed a dependency on the roughness of the substrate with an odd–even effect observable only on smooth, but not rougher (Rrms ≥ 1.15 nm), surfaces. These results confirm that the previously predicted limit to observation of the odd–even effect in hydrophobicity (here extended to polar liquids) is real. From the results with glycerol, we infer that this limit is not limited just to hydrophobicity but may extend to other polar liquids. Results from hexadecane, however, suggest that this limit may not be a universal property of the SAM.