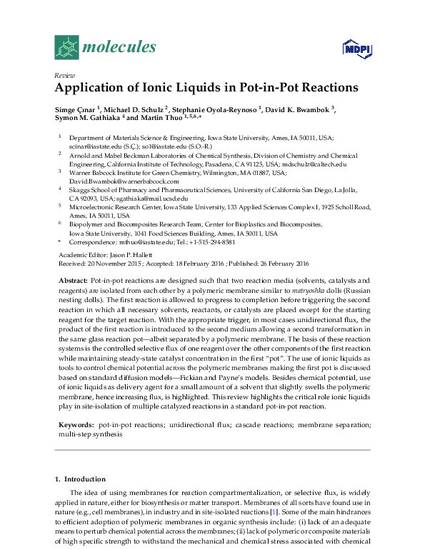 Pot-in-pot reactions are designed such that two reaction media (solvents, catalysts and reagents) are isolated from each other by a polymeric membrane similar to matryoshka dolls (Russian nesting dolls). The first reaction is allowed to progress to completion before triggering the second reaction in which all necessary solvents, reactants, or catalysts are placed except for the starting reagent for the target reaction. With the appropriate trigger, in most cases unidirectional flux, the product of the first reaction is introduced to the second medium allowing a second transformation in the same glass reaction pot—albeit separated by a polymeric membrane. The basis of these reaction systems is the controlled selective flux of one reagent over the other components of the first reaction while maintaining steady-state catalyst concentration in the first “pot”. The use of ionic liquids as tools to control chemical potential across the polymeric membranes making the first pot is discussed based on standard diffusion models—Fickian and Payne’s models. Besides chemical potential, use of ionic liquids as delivery agent for a small amount of a solvent that slightly swells the polymeric membrane, hence increasing flux, is highlighted. This review highlights the critical role ionic liquids play in site-isolation of multiple catalyzed reactions in a standard pot-in-pot reaction.