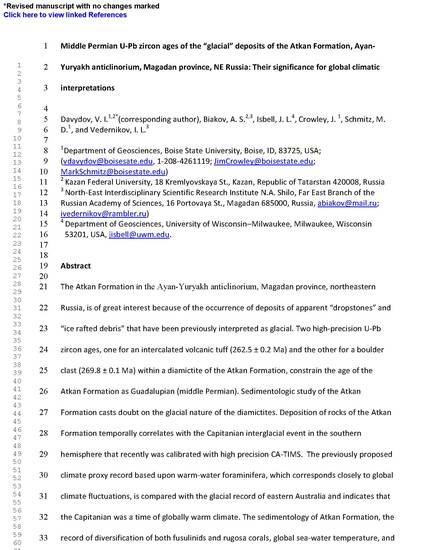 The Atkan Formation in the Ayan-Yuryakh anticlinorium, Magadan province, northeastern Russia, is of great interest because of the occurrence of deposits of apparent “dropstones” and “ice rafted debris” that have been previously interpreted as glacial. Two high-precision U-Pb zircon ages, one for an intercalated volcanic tuff (262.5 ± 0.2 Ma) and the other for a boulder clast (269.8 ± 0.1 Ma) within a diamictite of the Atkan Formation, constrain the age of the Atkan Formation as Guadalupian (middle Permian). Sedimentologic study of the Atkan Formation casts doubt on the glacial nature of the diamictites. Deposition of rocks of the Atkan Formation temporally correlates with the Capitanian interglacial event in the southern hemisphere that recently was calibrated with high precision CA-TIMS. The previously proposed climate proxy record based upon warm-water foraminifera, which corresponds closely to global climate fluctuations, is compared with the glacial record of eastern Australia and indicates that the Capitanian was a time of globally warm climate. The sedimentology of Atkan Formation, the record of diversification of both fusulinids and rugosa corals, global sea-water temperature, and sea-level fluctuations agree well with high latitude paleoclimate records in northeastern Russia and eastern Australia. Major components of the Atkan Formation, the volcanic rocks, are syngenetic with the sedimentation process. The volcanic activity in the nearby regions during middle-late Permian was quite extensive.

This is an author-produced, peer-reviewed version of this article. © 2016, Elsevier. Licensed under the Creative Commons Attribution-NonCommercial-NoDerivatives 4.0 license. Details regarding the use of this work can be found at: http://creativecommons.org/licenses/by-nc-nd/4.0/ . The final, definitive version of this document can be found online at Gondwana Research, doi: 10.1016/j.gr.2015.10.014