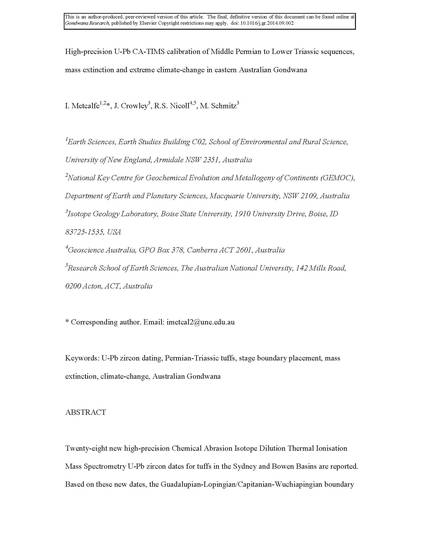 Twenty-eight new high-precision Chemical Abrasion Isotope Dilution Thermal Ionisation Mass Spectrometry U-Pb zircon dates for tuffs in the Sydney and Bowen Basins are reported. Based on these new dates, the Guadalupian-Lopingian/Capitanian-Wuchiapingian boundary is tentatively placed at the level of the Thirroul Sandstone in the lower part of the Illawarra Coal Measures in the Sydney Basin. The Wuchiapingian-Changhsingian boundary is at or close to the Kembla Sandstone horizon in the Illawarra Coal Measures, southern Sydney Basin, in the middle part of the Newcastle Coal Measures in the northern Sydney Basin, and in the middle of the Black Alley Shale in the southern Bowen Basin. The end-Permian mass extinction is recognised at the base of the Coal Cliff Sandstone in the southern Sydney Basin, at the top of the Newcastle Coal Measures in the northern Sydney Basin, and close to the base of the Rewan Group in the Bowen Basin and is dated at c. 252.2 Ma. The end-Permian mass extinction is interpreted to be synchronous globally in both marine and terrestrial environments, and in high and low latitudes (resolution < 0.5 my). The GSSP-defined Permian-Triassic boundary is interpreted to be approximately at the level of the Scarborough Sandstone in the lower Narrabeen Group, Sydney Basin, and in the lower Rewan Group, Bowen Basin. New dates presented here suggest that the P3 and P4 glacial episodes in the Permian of eastern Australia are early Roadian to early Capitanian, and late Capitanian to mid Wuchiapingian in age respectively. The greenhouse crisis in the uppermost Pebbly Beach and Rowan Formations of the Sydney Basin is interpreted as early mid Roadian, a mid-Capitanian age for the crisis at the base of the Illawarra/Whittingham Coal Measures is confirmed. Greenhouse crises in the upper Illawarra/Newcastle Coal Measures and lower Narrabeen Group of the Sydney Basin are dated as upper Changhsingian-Induan, and in the upper Narrabeen Group/lower Hawksbury Sandstone as upper Olenekian.

This is an author-produced, peer-reviewed version of this article. © 2009, Elsevier. Licensed under the Creative Commons Attribution-NonCommercial-NoDerivatives 4.0 International License (https://creativecommons.org/licenses/by-nc-nd/4.0/). The final, definitive version of this document can be found online at Gondwana Research, doi: 10.1016/j.gr.2014.09.002