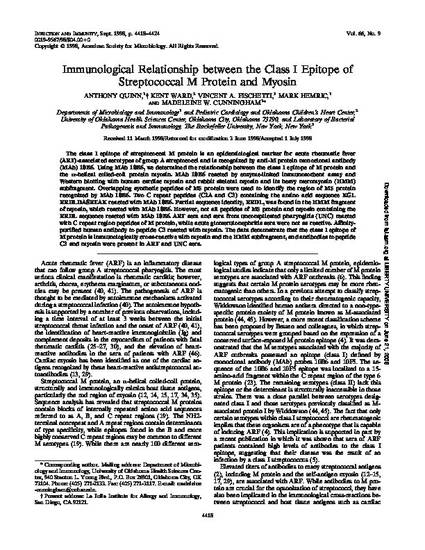 The class I epitope of streptococcal M protein is an epidemiological marker for acute rheumatic fever (ARF)-associated serotypes of group A streptococci and is recognized by anti-M protein monoclonal antibody (MAb) 10B6. Using MAb 10B6, we determined the relationship between the class I epitope of M protein and the a-helical coiled-coil protein myosin. MAb 10B6 reacted by enzyme-linked immunosorbent assay and Western blotting with human cardiac myosin and rabbit skeletal myosin and its heavy meromyosin (HMM) subfragment. Overlapping synthetic peptides of M5 protein were used to identify the region of M5 protein recognized by MAb 10B6. Two C repeat peptides (C2A and C3) containing the amino acid sequence KGL RRDLDASREAK reacted with MAb 10B6. Partial sequence identity, RRDL, was found in the HMM fragment of myosin, which reacted with MAb 10B6. However, not all peptides of M5 protein and myosin containing the RRDL sequence reacted with MAb 10B6. ARF sera and sera from uncomplicated pharyngitis (UNC) reacted with C repeat region peptides of M protein, while acute glomerulonephritis sera were not as reactive. Affinity purified human antibody to peptide C3 reacted with myosin. The data demonstrate that the class I epitope of Mprotein is immunologically cross-reactive with myosin and the HMM subfragment, and antibodies to peptide C3 and myosin were present in ARF and UNC sera.