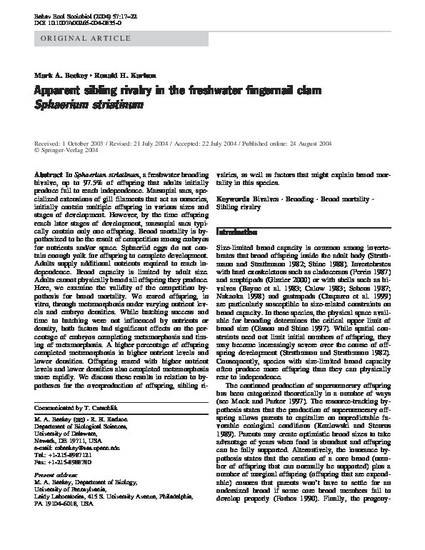 In Sphaerium striatinum, a freshwater brooding bivalve, up to 97.5% of offspring that adults initially produce fail to reach independence. Marsupial sacs, specialized extensions of gill filaments that act as nurseries, initially contain multiple offspring in various sizes and stages of development. However, by the time offspring reach later stages of development, marsupial sacs typically contain only one offspring. Brood mortality is hypothesized to be the result of competition among embryos for nutrients and/or space. Sphaeriid eggs do not contain enough yolk for offspring to complete development. Adults supply additional nutrients required to reach independence. Brood capacity is limited by adult size. Adults cannot physically brood all offspring they produce. Here, we examine the validity of the competition hypothesis for brood mortality. We reared offspring, in vitro, through metamorphosis under varying nutrient levels and embryo densities. While hatching success and time to hatching were not influenced by nutrients or density, both factors had significant effects on the percentage of embryos completing metamorphosis and timing of metamorphosis. A higher percentage of offspring completed metamorphosis in higher nutrient levels and lower densities. Offspring reared with higher nutrient levels and lower densities also completed metamorphosis more rapidly. We discuss these results in relation to hypotheses for the overproduction of offspring, sibling rivalries, as well as factors that might explain brood mortality in this species.