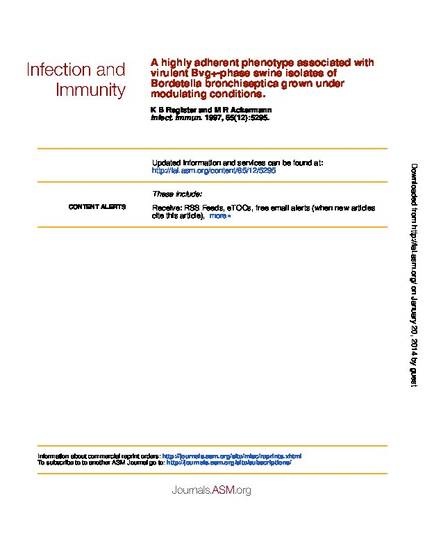 The ability of Bvg(-)-phase and Bvg(+)-phase Bordetella bronchiseptica swine isolates, grown under modulating or nonmodulating conditions, to adhere to swine ciliated nasal epithelial cells was determined. When virulent strains were cultivated at 37 degrees C in the Bvg+ phase, numerous adherent bacteria (approximately eight per cell, depending on the strain used) were observed. However, when such strains were grown under modulating conditions (23 degrees C), a significant increase in the level of attachment was seen, suggesting that B. bronchiseptica produces a Bvg-repressed adhesin under these conditions. bvg mutant strains, including an isogenic bvgS mutant, adhered minimally. Western blots indicated that two putative B. bronchiseptica adhesins, filamentous hemagglutinin and pertactin, were not detectable in cultures displaying the highly adherent phenotype. Several proteins apparent in Western blots obtained by using bacterial extracts enriched in outer membrane proteins derived from B. bronchiseptica grown at 23 degrees C were not present in similar extracts prepared from an isogenic bvgS mutant grown at 23 degrees C or from the parent strain grown at 37 degrees C. Adherence of bacteria cultivated at 23 degrees C was almost completely abolished by pretreatment of organisms at 60 degrees C; adherence was reduced by 57% when bacteria were pretreated with pronase E. Temperature shift experiments revealed that the heightened level of adhesion that occurs following growth at 23 degrees C was maintained for up to 18 h when bacteria were subsequently incubated at 37 degrees C. We propose that a Bvg-repressed adhesin, expressed only by modulated bvg+ strains of B. bronchiseptica, may play a key role in the initial colonization of naturally infected swine.

Disciplines
Publication Date
Publisher Statement
Works produced by employees of the U.S. Government as part of their official duties are not copyrighted within the U.S. The content of this document is not copyrighted.
Citation Information
Karen B. Register and Mark R. Ackermann. "A highly adherent phenotype associated with virulent Bvg+-phase swine isolates of Bordetella bronchiseptica grown under modulating conditions" Infection and Immunity Vol. 65 Iss. 12 (1997)
Available at: http://works.bepress.com/mark_ackermann/88/